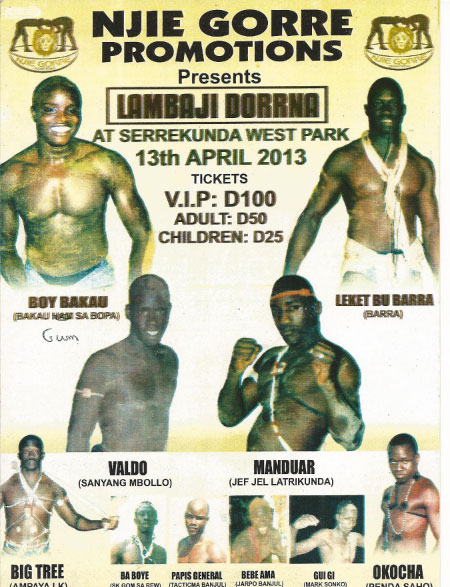 Abdoulie Goree Njie, Njie Gorre promoter, has said he is willing to do all he could to uplift Gambian wrestling to the highest level by investing millions on wrestlers as he prepares to take a handful of Gambia wrestlers into the ring this Saturday.

He said: “If there is any possibility where I can pay a wrestler one million dalasi, I will, but anything has a step and I am willing to promote wrestling with the best of my ability.”

He, however, said there would be tight security to ensure peace and stability during the contests.

Promoter Njie Goree was speaking to sports reporters yesterday ahead of next Saturday’s 13 April 2013 wrestling contest staged by Njie Gorre Promotion due to be held at the Serrekunda West Mini Stadium commencing at 16:00 hours.

The press briefing was held at the Timeless Gym and Restaurant on Kairaba Avenue adjacent to QCell headquarters, which attracted representatives from the Gambia Wrestling Federation, wrestlers and their managers and other stakeholders.

Also speaking, Habibu Nyassi, secretary general of the Gambia Wrestling Federation, urged wrestlers not to involve in any form of violence at the slated wrestling competition.

“If anyone of you, the wrestlers, loses a fight, you have to admit the defeat in good faith and maintain peace and respect with your opponent,” he said.

GAWJA chairman Alhagie Cham commended the promoter saying they are looking forward to helping promote the game to a higher level and will bring wrestlers together as one.

Due to contest on Saturday are Boy Bakau vs. Leket Bu Barra, Valdo vs. Manduar, Big Tree vs. Okocha, Ba Boye vs. Papis General and Bebe Ama vs. Gui Gi.