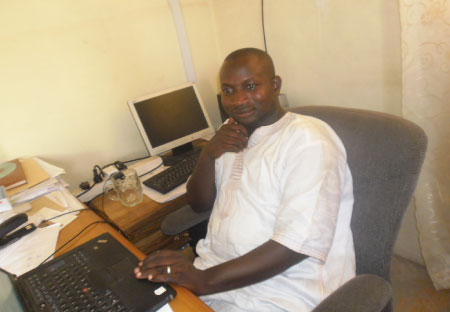 Why can’t we learn from the Gabbie Sosseh’s U-17 five-year plans, which really paid a great dividend in the development of Gambian football? Gabbie’s plans immediately from Mbabane, Swaziland, in 2003 really worked and contributed greatly to the current position of Gambian football. Thank you very much Uncle Gabbie; Gambia would never forget you.

It is good for Coach Luciana Mancini to know that there is no time to rest but to continue the training schedule; there are still chances to make yourself a name by qualifying The Gambia to Brazil 2014 Fifa World championship.

For you to succeed you have to work hand in glove with your coaching staff and quickly come up with plans for training camps and organize series of test matches within and outside the country.

If you come up with plans you would be surely supported, and remember the entire Gambian population is behind you with all their prayers. Go, go coach Mancini you can do it. You can really make history by qualifying The Gambia to it maiden World Cup appearance at the senior level.

We have done it in 2005 with an African coach Osam Doudu, who qualified the U-17 to the World Cup in Peru and also put up a very respectable performance during the tourney.

Technical Support
The recent straightening of the FA’s technical department is a good step in a right direction.

But hope they know what the primary objective of that component of the association is all about. The main objective is to create a vibrant technical department for our football.

Although the league is now ended, plans should be made to go round the country and even beyond to scout for Gambian players and scrutinizing them on their performance and playing time in their various leagues.

We should not only rely on lip service about our foreign-based players, but we should visit them at their various teams and watch them play.

Some of our foreign-based players we waste our resources on, even if they have clubs abroad, may not have enough playing time or may not even be playing in a recognised league.

Since there would not be any match at the senior squad level till next, this time should be used as an opportunity to prepare ourselves well, by identifying new talents and improving the skills of the already existing ones.

We can as well organize series of test matches both at home and abroad to prepare the team very well; rather than waiting for the last minute and start rushing up every thing.

Fund mobilization
Some times I feel flabbergasted when I hear the FA says we cannot organize test matches or we can’t do this because we don’t have money.

Football is a joke, but indeed a serious joke. Therefore we need to take it very seriously and entrust it to people who are interested in managing the game, but not people who are just there because they once played football for the nation.

Yes they have the expertise to direct the game, but that is not enough for them to be entrusted to run the affairs of the association. Football is very expensive, so we need to learn how to mobilize funds for the development of the game in the country. Sometimes I cannot understand the relationship between the instituted Gambia for Gold by the Ministry of Youth and Sports and the Gambia Football Association.

Although it is a great idea to create the Gambia for Gold by the ministry, but I think they should be working hand in hand with the FA, as both parties are given the responsibility to manage the affairs of football in the county as well as to manage the national teams on behalf of the government.

We need to entrust the game to people with good financial discipline and good reputation in leadership positions with ability to convince potential sponsors to invest their funds in football.

‘’Let me tell you, do you know why we lost to Algeria in Algiers? It is because of the ball they used, which our players are not exposed to yet,’’ says a senior football official.

Is this not a shame for the country; even to buy smart jaboulani balls for our football we cannot? Let us involve people into the game who’re ready to invest their resources in it and not those expecting to eat from the game at the detriment of the nation.

The national team is owned by the government, so I think when there is problem of clearing a consignment of balls from the airport we should involved the authorities concerned and seek their assistance.

Please let us stop given our country a bad name. Football is an investment, therefore let us invite potential investors into the game to invest their resources and gain dividends at the end.

Why can’t we project how much we expect to gain from the remaining coming matches of the Scorpions and sell all the matches to a company at an interest rate with all the match rights?

With the forthcoming international matches now is the high time we should start selling the match rights to companies and individuals and rest from all the troubles of ticket printing and thinking of being duplicated by others before the matches.

Forthcoming GFA election
The September 2012, Gambia Football Association election should not only be an avenue to elect  a new president, but the congress should be used as platform to reflect back on the achievements of the past presidents of the association before choosing a successor to the bulldozed  Seedy Kinteh regime.

I am not trying to belittle anybody here or to campaign for anybody, but we need to elect someone who has resource and ready to borrow football.

We don’t need a president who cannot sacrifice his funds to pre-finance the FA’s activities, but rather wait for people to go and look for donation for him to enrich himself at the expense of the association.

Previous FA president’s, I can remember, from Alhagie O.B. Conateh, Alhagie Gabbie Sosseh and Seedy Kinteh both used to pre-finance some of the FA’s activities and get refunded later when the FA’s account turned red.

So we need a president like these few names I have mentioned above. Let us do away with personal sentiments and come together to develop our football.