The exhibition, initiated by the Youki Drink Brand, a product of the Banjul Breweries Limited, Comium and Alliance Franco will run from 8th-27th February 2010.

Speaking to journalists over the weekend, Yuspalkala, head of the organisers said the exhibition is meant to showcase and celebrate the African culture in an imaginative way, through painting. Yuspalkala called on young Gambian artists to take up arts with seriousness, adding that it's not only to provide income, but also to build reputation.

He explained that organising such an exhibition is part of contributing to national development, and assured that the Gambian leader has always given full support to arts in the country. The Nigerian based-Gambian thanked his sponsors for a job well-done. He also thanked President Jammeh and his government for supporting arts in The Gambia, adding that the official opening is expected to be witnessed by senior government officials from the Ministry of Arts and Culture, Ambassadors representing their various countries, companies and the members of the press. 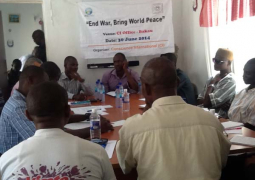