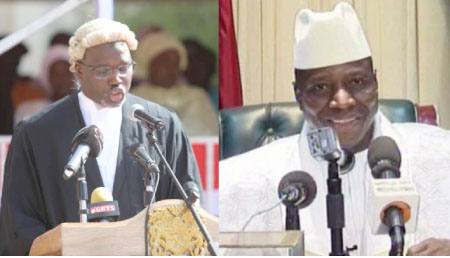 Dodou Jah, the deputy spokesperson of the former ruling Alliance for Patriotic Reorientation and Construction (APRC) has slammed the Attorney General and Justice Minister Abubacarr Tambadou, saying that he (Tambadou) has personal hatred for former President Yahya Jammeh and the APRC party.

“Being the Justice minister doesn’t mean that you own the country or you are the president. In fact, that’s how some people already assumed that he has power beyond the constitution. Tambadou, has tries it before looking at the case of Fatoumatta Jahumpha Ceesay and Yankuba Touray and he failed,” he told The Point in an exclusive interview

The Justice minister on Sunday during the opening of the Legal Year 2020 said: “If former President Yahya Jammeh ever comes back to this country, he will face immediate arrest and charges of the most serious kind and no amount of irresponsible talk or political brinkmanship will prevent this from happening.”

However, this statement didn’t go well with supporters and sympathisers of the former ruling party who took to social media criticising the Justice minister.

Mr. Jah added: “We supposed to have an executive meeting tomorrow and I’m sure the Justice minister’s statement with regard to arresting Jammeh when he arrive in the country is going to be part of the discussion. I’m hopeful that the party will either issue a press statement in connection with his comments or call for a press conference.”

“We will definitely respond to his claim. Of course I viewed his claims as threat because he said if Jammeh comes into the country he will be arrested. He is trying to paint him as if he (Jammeh) is a ‘devil’. We have a constitution and that is not what our constitution says.”

According to him, even going by the constitution, taking people to courts is one thing but the courts don’t function as how he (Tambadou) thinks.

Dodou Jah accused Tambadou of trying to use force in the murder trial involving former APRC Junta, Yankuba Touray, saying “he is going to lose because all the witnesses he is bringing are not ‘credible’.

“So, for how long will Ba Tambadou keep doing this from all his wishful thinkings not going by the books? The Justice minister don’t only have an agenda on APRC but hatred. Tambadou has personal hatred against Yahya Jammeh and he dislikes the APRC as a party and he also undermines President Barrow,” he further accused.

On the issue of the diplomatic passports, the APRC deputy spokesperson said: “If this was in another country that person would have not been the Justice minister today because it is a “criminal act.”

“If he was credible enough, he should have resigned when the issue of the diplomatic passports come. People should do not need to tell him to resign knowing that “he has abused the public office,” so what excuses can you give?

Jah added: “Yes you have a right to arrest somebody and put them in cell for detention, but the law has to take its course and he (Tambadou) doesn’t own the courts. I think he is just trying to please the Western donors, EU, ECOWAS and others because they’re putting in their monies and supporting them and what those people are pushing is for Jammeh to face Justice.”