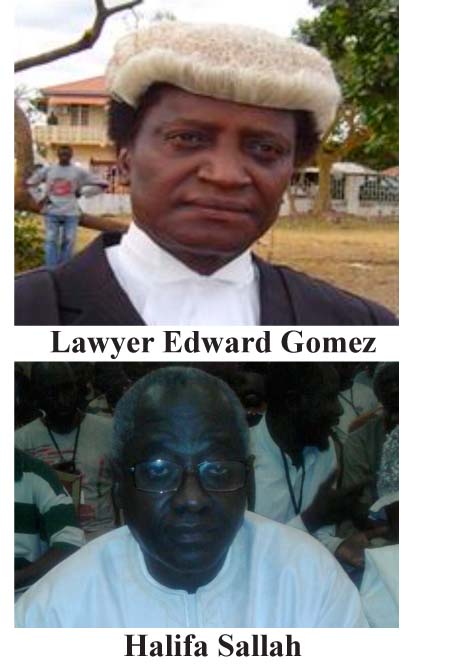 Halifa Sallah says that is not law or common sense

The lawyer representing the ruling APRC party in the election petition filed at the Supreme Court in Banjul has said the inauguration of President-elect Adama Barrow, due on 19 January, should wait until the petition is determined.

But the spokesperson of Mr Barrow’s coalition, Halifa Sallah, said this is neither in line with law nor common sense for a losing party - the Alliance for Patriotic, Reorientation and Construction (APRC) - to have such a right.

The APRC counsel, lawyer Edward Gomez, said: “The inauguration should wait until the due process of the law takes place.”

Speaking to journalists yesterday shortly after Chief Justice Emmanuel Fagbenle adjourned the petition case till Monday, 16 January, Lawyer Gomez said while the case is being determined, “the status quo remains”.

A private legal practitioner and a member of the Gambia Bar Association, who does not want to be named, said when the election petition is not finally determined until 19 January, then the inauguration of Mr Barrow should be done, according to law.

However, the APRC lawyer said everybody is entitled to his opinion. “Our opinion is that we have a substantive matter in court, and it ought to be heard according to the right of the petitioner, according to law and the constitution.”

“There is a pending issue; it ought to be heard.  There is a rule of law that everybody is entitled to a fair hearing,” he said, adding that he would advise his client, the APRC, “to proceed with their legal rights to the fullest”.

Meanwhile, Mr Sallah of the coalition that won the 1st December presidential election said it is neither in line with law nor common sense, for a loser to have the right to abrogate or suspend the right of the victor (the winning party) until an election petition is determined.

“The right of a victor to be sworn in as president and the duty of the incumbent to leave office at the end of his term are not invalidated by filing an election petition.

“The office of President-elect Barrow has made it absolutely clear that the exercise of the right to file an election petition by the loser does not deprive the winner of the right to prepare for inauguration as president of the republic, on 19 January 2017.”

According to Mr Sallah, the 1997 Constitution states that the person declared elected as president shall take the prescribed oath and assume office, on the day the term of office of the incumbent president expires.

“I think this is very clear.  I think there is no possibility of distortion,” he continued.

He pointed out that the Office of President-elect stands by the principle that Adama Barrow’s election as the president of The Gambia stands.

In this vein, Mr Sallah called on the general public to prepare for the inauguration of the president-elect on 19 January.

“The status of an election petition should be regarded as a peripheral issue and should, therefore, not hamper any preparation for the inauguration.”

Incumbent president Yahya Jammeh, who ruled The Gambia for 22 years, lost the election to Mr Barrow, who leads a coalition of eight opposition parties.

Jammeh’s ruling APRC party has filed two petitions challenging the election result at the Supreme Court, the highest law court of the land.

In the petition, filed on 13 December, the APRC is praying that the court declares the election void and the results invalid.

The party argues in the petition that the electoral commission did not conduct the election in good faith.

The petition case was first heard on 21 December at the Supreme Court, but it could not continue as the court did not have enough judges to constitute a panel to hear the matter.

The Gambia’s Nigerian Chief Justice, who serves as the head of the Supreme Court panel, was the only one available for the petition.

After adjourning the case to 10 January, Chief Justice Fagbenle said five more judges were hired from Nigeria and one from Sierra Leone.

These judges were expected in Banjul early this January to be sworn in and to start work in earnest.

But at Tuesday’s hearing, Justice Fagbenle said he had received letters from the chief justices of Nigeria and Sierra Leone.

In the absence of these judges, the APRC’s election petition cannot be determined, because it can only be considered by the full panel of the Supreme Court of The Gambia, of five or seven judges.