The All People’s Congress (APC) party the Gambia branch, in its tireless efforts to expand the party’s support in the country, recently inaugurated a unit executive in one of the most populated regions and second capital, Basse.

In making the occasion a colourful and celebrated one, Sierra Leone’s Ambassador to The Gambia, H.E. Sulayman Daramy, made a positive contribution morally and financially.

His financial contribution was handed over on his behalf by the consul of the Embassy, Mr Sheku Kamara, to the party branch secretariat.

The consul, Mr Kamara, who doubles as one of the founding fathers of the APC branch in The Gambia, also gave his personal financial contribution.

In his remarks, Mr Kamara urged party members to be loyal and steadfast in promoting the ideals of the party at all times.

He informed the gathering of the unavoidable absence of the deputy Ambassador Madam Haja Sadiata Sesay, whom he said would have loved to be present.

He however lauded the readiness of the support by Deputy Ambassador Sadiata Sesay.

He said the support of the Ambassador, the Deputy Ambassador and the Consul of the Embassy “is not a surprise as they are true party stalwarts who always have the party at heart”.

The past weekend marked another historic occasion in the history of the All Peoples Congress party Gambia branch, as Sierra Leoneans mostly Sarahuli wives fromthe peripheral villages of Basse, Gambisary, Diabugu, Garawol and others met at the Anglican Mission School for the inauguration of the Basse APC chairman Ibrahim Gaspa Kamara.

The ceremony was presided over by the Governor of the Upper River Region, Mr Omar Sonko Ceesay.

In his address, he thanked his Excellency, Sheikh Prof. Dr Alh. Yahya A.J.J Jammeh for creating the peace and enabling environment for people in the country to interact freely.

He commented on the love and solidarity that has been existing between Sierra Leone and The Gambia since colonial times.

He encouraged the chairman-elect to work with the camp he defeated in the election to consolidate the peace.

A high-powered delegation headed by the national APC Gambia branch Vice Chairman Alimamy Dumbuya was dispatched from the secretariat in Serrekunda to give the occasion the flavour that befits it.

The inauguration was interspersed with masquerading and paddle dancing. 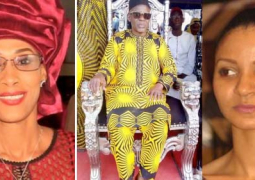