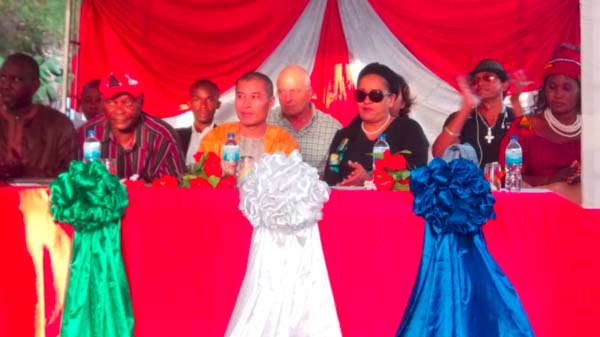 Alie Serry Kamal, Secretary General of the party, began by thanking His Excellency Ambassador Sulayman Daramy and everyone that stood and contributed to the unity and peace of the party as well as organisations that have been supporting them.

They are one people and one country despite some of the differences in the past, he stated, saying all is now water under the bridge.

“Peace for APC means peace for all Sierra Leoneans residing in The Gambia,” Mr Serry Kamal remarked, saying that for two years they had “gained nothing” due to petty squabbles among themselves.

Henceforth, he added, discipline, unity, love and progress reign supreme in the party and among Sierra Leoneans in The Gambia.

In his remarks on the occasion, Sierra Leone Embassy representative Sheku Kamara said the party has to progress and move forward, adding that they would not hesitate to take necessary measures on anyone wanting to divide the party.

Mr Kamara, a staunch APC member and a founder of the APC branch in The Gambia, called on APC members to move on, saying letting the party go from strength to strength is all the members’ responsibility.

He emphasised the need to put aside tribal differences and grievances and work towards the continued progress and prosperity of the party.

Mrs Fatmeh Barry-Guo, who was together with her husband Si Guo, as guests of honour, were decorated and given grand chief patron membership cards of the party.

In her remarks, the progress-oriented Mrs Barry-Guo said for any party to succeed there needs to be unity among its members.

“Unity is the most important thing among human beings,” she stated, calling on her people to come together as one, especially at a time their country is hit by Ebola.

“Let us be strong as ever,” Madam Barry-Guo told APC members, saying that if they are one there is nothing they could not achieve.

She further stressed the essence of discipline among all her party members and compatriots.

She also assured the party of her support whenever it is needed, saying she stands ready to help with anything that will promote the party.

She also expressed her readiness in supporting the women and youth to further their education as well as create employment opportunities for them.

Edward Conteh, one of the party members who boycotted the party but came back for unity, thanked Ambassador Soulay Daramy for his tireless efforts at re-uniting APC party in The Gambia.

Let bygones be bygones, the instrumental APC figure said, calling on everyone to continue to work in unity for the betterment of the party.

They were APC and will remain to be APC, he said.

Party members and strong organisers of the party from the length and breadth of The Gambia including Basse, converged at the APC Secretariat in Serrekunda (Banjul) to witness the convivial and family convergence of the Gambia branch of the ruling APC party of Sierra Leone.

All the speakers applauded the Gambian leader President Yahya Jammeh and the people of The Gambia for their love, care and hospitality to Sierra Leoneans in The Gambia.