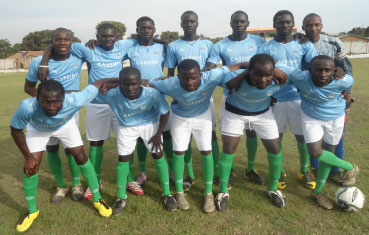 The Sports Journalists Association of The Gambia on Monday evening at the football grounds conceded their second straight defeat in the Late Fatou Mbye Memorial Football match in Sukuta, Pointsport has gathered.

The SJAG side led by temporal captain Ebrima Campo Jatta lost narrowly to Kairaba FC, a strong Nawetan team in Sukuta who are also through to the league and the knockout stages of the Sukuta summer championship.

The journalists’ team, which had an outstanding game throughout the encounter, conceded an early first-half goal when captain Ebrima Jatta failed to clear the ball away from the danger zone after terrible errors between Foroyaa newspaper’s sports editor Sulayman Bah and West Coast Radio’s reporter Alagie Fatty, resulted in Kairaba’s opener that also proved to be the game’s only goal of an exciting contest.

The result has confirmed the journalists’ second defeat in a row as it has followed another narrow 1-nil loss against Sukuta’s Seaview FC last week.

The friendly match coincided with the commemoration of the late colleague Fatou B.K. Mbye, who passed away on 31 October 2009, after a long illness.