As part of World Malaria Day celebrations, AMMREN Gambia Chapter, in collaboration with the parent body, on Monday held a one-day sensitisation forum on malaria and its burden on society at the media agenda in .

The sensitisation forum attracted members, journalists and medical experts from well-recognised institutions who gave brief presentations on malaria and its burden on society.

In his keynote address the AMMEREN country coordinator, Mr. Pa Modou Faal, said that today is important day in the history of AMMREN to celebrate Africa Malaria Day in The Gambia chapter. "This is really a proud day, he said. AMMREN was launched in 2006 in as a result of that AMMREN realised that there is a need for the journalists to work closely with scientists and health personnel in the fight against malaria in .

He pointed out that AMMREN is ready to work with all walks of life and that no stakeholder will be left behind in the fight against Malaria.

Mr. Faal therefore urged the journalists to work closely with the medical experts in fighting against malaria. "AMMREN realised that the medical experts alone can't fight against the malaria. The journalists must play their part in the sensitisation through quick dissemination of messages relating to the dreaded diseased. Mr. Faal thanked the Malaria Clinical Trials Alliance (MCTA), Indept-Network of and the AMMREN secretariat for making the day possible.

Also speaking at the occasion Mr. Emil Touray, Secretary General the Gambia Press Union, urged the journalists to be very aware of issues around malaria in order to inform the general public. "I am delight that Gambia Press Union is Associated with such a wonderful forum to sensitise people on the issues concerning malaria," she said.

Mr. Touray therefore encouraged the journalists to embark on investigative journalism on malaria and not only confine themselves to press releases which are sent to the paper for publication. He said that journalists should go for critical messages about malaria and its burden on society which would be more helpful to the general public.

The one-day forum was chaired by the former president of The Gambia press union Mr. Madi Ceesay. Dr. Kalifa Bojang, a scientist at the Medical Research Council presented a paper on malaria clinical trials in The Gambia and Lamin B.S Jarju of Focal point ITNS also attended. 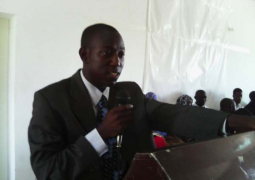