Mr. Pa Modou Faal, a Sub Editor with the Point Newspaper and the National Coordinator of African Media and Malaria Research Network Gambia Chapter left over the weekend for where he will participate in the 5th Pan African Malaria Conference, to be held at the Jenyatta International Conference Centre from 2 - 6 November 2009. His trip is sponsored by the Malaria Clinical Trials Alliances (MCTA).

The conference is being organised by Multilateral Initiative on Malaria (MIM) and Kenya Medical Research Institute.

The forum, according to the organisers, is a unique opportunity for malaria research community stakeholders to meet and review recent findings, identify priority areas and discuss ways to translate research into policy and operational guidelines.

According to the invitation, Mr. Faal's contribution towards AMMREN over the years has been very helpful, noting that his contribution and participation in the conference would also contribute towards the eradication of malaria in and the world at large.

Speaking to our reporter shortly before his departure, Mr. Faal has this to say "I would like to thank the management and staff of the Point Newspaper for allowing me to attend this important conference that will avail me and AMMREN to meet with partners to share information based on the activities of the network, and also to lobby more funds from the donor community and the way forward."

AMMREN National Coordinator however noted that The Gambia will benefit a lot from this conference because the country has achieved a lot in the eradication of the killer- disease as giant strides have been taken by the network and its partners in The Gambia.

Pa Modou Faal, who was also part of the founding members of the network, said it was established in 2006 comprising scientists, researchers, and journalists in ten African countries. He commended AMMREN and MCTA for sponsoring his trip to . 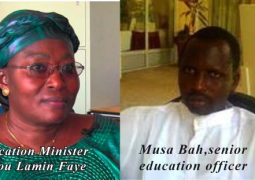 Report on Food Vulnerability in Banjul and Kanifing Municipality Released