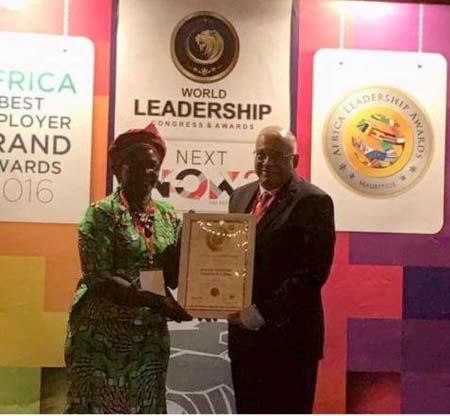 American International University West Africa (AIUWA) in The Gambia has been awarded this year’s African Education Leadership Award at a ceremony held on 7 December 2016 in Mauritius.

The international award was received by the founder and president of the university, Dr Dinesh Shukla, during the 6th Africa Education Leadership Awards.

The Africa Education Leadership Awards is run and managed virtually by professionals who have full time jobs but are united by a common passion of making a difference in Africa.  The organisation has hosted some of the best events such as World Brand Congress, World Education Congress, among others.

Officials explained that the procedure in which the award winners are selected is rigorous. The task of choosing an award winner is assigned to a global research cell, which constitutes professionals from different parts of the world.

This year, more than 20 categories were recognised, including high profile corporate business leaders in Africa.

Dinesh Shukla, president of AIUWA, at a news conference, thanked The Gambia government for providing the enabling environment for the university to fulfil its mission and vision.

“It is an honour to receive this award and I would like to share it with the people of The Gambia,” he said.

The students sit to American Professional Board Examinations and receive American certification.  The university is opened to students from all over Africa.

The university officials said the current student population is derived from 16 countries in Africa.

Scorpions Encamp Ahead of Saturday's Cracker