One Samba Sey on appeared before Magistrate Pa Harry Jammeh of the Brikama Magistrates' Court charged with house-breaking and stealing.

He pleaded guilty to the charges and was convicted and sentenced to six months imprisonment with hard labour.

According to the offence, on count one, on at Sinchu Sorry village, the convict broke in to the dwelling house of one Yerro Kanteh with intent to commit a felony to with stealing.

While on count two, the offence revealed that on the same day, month and place, the convict entered the dwelling house of Yerro Kanteh and stole items valued at D7,230 being the property of the said Yerro Kanteh.

In a related development one Abdoulie Jobe was also recently convicted and sentenced to a fine of D5000 in default to serve six months imprisonment for stealing.

The convict was said to have on at Wellingara village stolen two motor batteries valued at D5000 being the property of Modou Jallow. 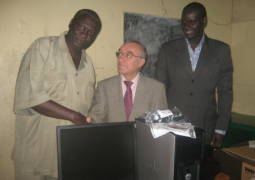