He told the court he recognised the accused and could recall what happened on 19 April 2013, adding that on the said day, he went to the mosque for Friday prayers.

He revealed that upon arrival at his home from the Friday prayers, he noticed his belongings were tampered with, stating that he then proceeded into his bedroom.

PW1 further revealed that he continued to the toilet where he found out that the window of the toilet was broken.

“I made a thorough search and I found out that my laptop, Ipad and Motorola charger were stolen and D14,000 was also missing,” PW1 told the court.

Kejara further adduced that he called the neighbours to come and witness what happened, adding that he went to police to report the matter and was referred to Kololi Police Post.

He said he could not locate Kololi Police Post untill on a Sunday, adding that he later made some calls to vendors who sell laptops, enquiring whether someone had not sold laptop, Ipad and Motorola charger to them and he gave them the marks of the stolen articles.

On 21 April 2013, he went on, he received a call from one Baba that someone had sold a laptop to him with the same mark he gave him.

“I then called my cousin, one Omar Badjie, and explained to him and I asked him to meet me at 4-Seasons along

“I was shown the accused from a distance and I rushed to Latrikunda German Police Post where a police officer was assigned to accompany me to the scene,” he expained.

The accused was then arrested and taken to Latrikunda German Police Post where he was cautioned and charged.

The items were tendered as exhibits.

The case was then adjourned till 20 May 2013, for cross-examination. 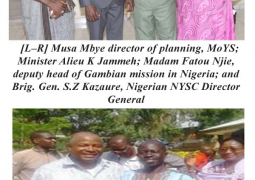