Edrisa Sanyang, a resident of Busumbala village, denied the charge and was subsequently granted bail of D20,000 with one Gambian surety.

The charge sheet read that on 10 February 2011, at Busumbala Village, in West Coast Region, the accused, Edrisa Sanyang, assaulted one Isatou Saidy with a cutlass in the middle of her head. 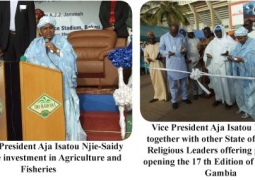