A fire outbreak in a compound called Samateh Kunda in Fajikunda, on Monday, ravaged the house of a soldier by the name Dawda Jatta.

The public relations officer of the Gambia Fire and Rescue Services (GFRS), Inspector Drammeh, said the fire started around 18.54pm.It started in the soldier’s house when he was not in.

Inspector Drammeh said the fire was burning in the house for long without neighbours noticing it.

He said when the fire was finally noticed, neighbours tried to put it off but their efforts was not enough to stop the fire from “completely burning to ashes” the soldier’s house.

However, thanks to the efforts of the neighbours and youth around the area, the fire did not spread to other houses before the fire services arrived to eventually put it off.

Inspector Drammeh said the fire services cannot be everywhere so they need the cooperation of the general public to inform them “as quickly as possible” in case of any fire outbreak to avoid “this kind of horrible situation”.

“The fire service can only intervene if we are informed early, but normally we are only contacted if the situation is out of control,” he said.

The GFRS PRO noted that most or all the fire outbreaks are caused by either electricity or candle light but he said the root cause of the fire in Samateh Kunda is yet to be established.

Inspector Drammeh thanked the men from the GFRS for their “excellent response” to the fire though they could not stop it from causing destruction. 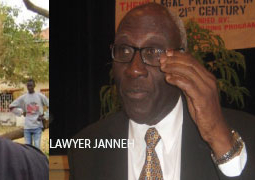