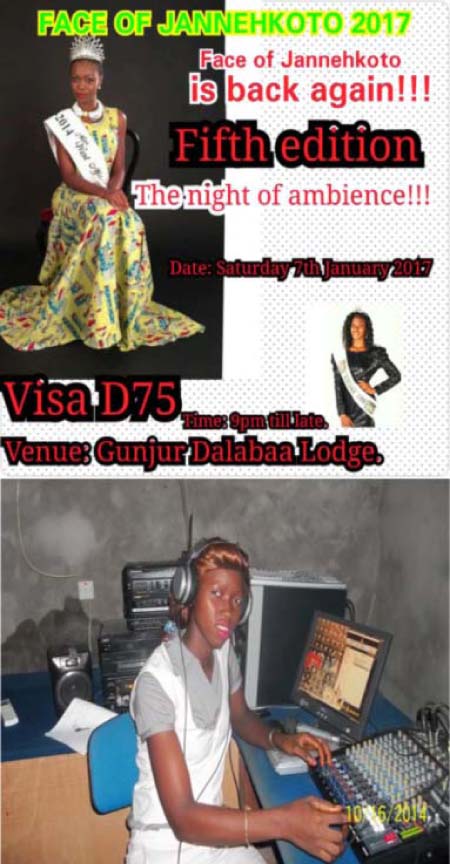 All eyes are set on Face of Jannehkoto 2017 beauty pageant fixed for tomorrow, Saturday 7 January 2017, at the Dalaba Lodge in Gunjur, Kombo South District of West Coast Region.

The annual beauty contest is set to bring together six contestants to challenge each other among whom one is expected to carry the day and become the winner of the 2017 crown.

The beauty contest is set to attract audiences from Kombo South and environs to experience an enthralling blitz of entertainment at the weekend.

The 2017 edition will be the fifth edition of the beauty contest since its inception in 2013, by Gunjur Radio Station, Jannehkoto FM.

Ticket for the beauty pageant is pegged at D75 at the gate.

The annual show of beauties is organised to raise funds in order to upgrade the transmission of Jannehkoto FM of the Gunjur Radio Station.

It would be recalled that, Aja Boto Cham won the first edition after beating Saineyba Janneh, Mariama Darboe and Sierreh K. Janneh to the crown.

Haddy Jobe won the second edition of the contest in 2014, after defeating Isatou Touray, Fatou Sowe Jabang and Fatou Jabang.

Hawa Sallah won the third edition in 2015 after beating her opponents to the crown.

Linder Salim Joof won the fourth edition after thumping her opponents to the annual beauty crown.