Albreda came from behind to celebrate a bitterly fought 2-1 victory over visitors Berending as part of the opening game of the Coca-Cola sponsored inter-secondary schools football tournament, at the Aja Fatou Bojang playing ground in Albreda.

A sensational 26 minutes strike from Sulayman Sonko was enough to bring the home team back into this titanic encounter after Omar Jammeh had given the visitors an early lead with only 18th minutes on the clock.

Within the twinkle of an eye, Lampard as he is widely called who has an outstanding game fired home from a clever close range effort after capitalising on a slopy defensive display by the opponent to the delight of his coach, who at times looked frustrated.

But another brilliant strike from substitute Sanna Sanyang proved to be a turning moment for the determined Albreda side in the later stage of a see-saw encounter. As a result, they went home with a deserved lead at the expense of the visiting team, who occasionally went close to equalising but all their brilliant attacking options and dominance in the middle in the later part of what appeared to be a lively game, were not good enough to earn them a happy moment.

The situation turned from bad to worst for Berending when they were reduced to a 10-man down following the dismissal of substitute Alasana Joof, as a result of an unsporting challenge on his opponent close to stoppage time.

Meanwhile, earlier in the day, Kuntaya were held to a hard fought goalless draw against Albreda, which saw Jabu Ndow sustained a serious injury after colliding with her opponent in the early minute of the game in the girls' category before they recovered from a 0-0 draw to beat Kuntaya 2-0 the following day.

Berending failed to put their disappointing 2-1 defeat to Albreda behind them as they played a goalless draw against Kuntaya in the second game of the boys' category on Friday, while Albreda girls enjoyed an emphatic 5-nil win over Kuntaya earlier on Friday.

Speaking to the gathering shortly before the kick-off, Saja Sambou, the Human Resource and PAC Manager of Gambega, who travelled to Albreda to officially kick start the championship on behalf of his company underscored the importance Gambega attaches to grassroots sports.

Sambou used the platform to advise the players to maintain discipline in a bid to realise their dreams of becoming national players in the very near future. 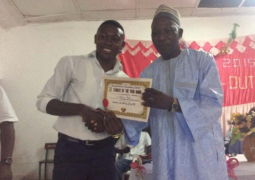