The Principal of Aji Sukai Ndateh Memorial Senior Secondary School, Mrs. Haddy Sey-Jammeh spoke at length about her school in an exclusive interview with this paper.

The school, she said, started operation in November 2005 and was built by Dr. Ebrima Malick Samba, under the umbrella of the Gambia Muslim Association.

She said that Dr. Samba has been inspired by the President's women empowerment project and his drive to educate girls. For that reason, she stated, Dr. Samba built the school and many other projects.

She further revealed that the school is relatively new, though it has taken giant stride in the education of girls in general.

"We are trying to empower girls because this is our objective," she added.

She further revealed that they have academic programmes and socio-economic activities, geared towards empowering the girl child.

She cited the tele-food programme that was hosted by the school sometime ago, mainly sponsored by FAO. She further indicated that they are taking up the challenge of educating any girl who is ready and determined to continue their education at senior secondary level, with the support of a parent or guardian.

"First exam in the WASSCE, our students attempted twice. Their best result was five credits with three passes and during the intake of this batch, the best student came with aggregate 44 from Grade Nine," she stated.

She reaffirmed the commitment of the school and it staff to give the best of education to its students.

"We offer science, commerce and arts along with IT and sports activity. On telefood, we have a poultry keeping, horticulture and we produce fruit trees and vegetable gardening and planting of trees," she told this reporter. She thanked all stakeholders who supported them and welcomed others to join the strife for quality education.

Mr. Ensa Jarjue, the head of the department of science, who doubles as Co-coordinator of the telefood project used the interview to advice schools to engage themselves in agricultural activities like poultry management, gardening, among others.

He said this would help them in the smooth running of the school in terms of teaching science-based subjects. 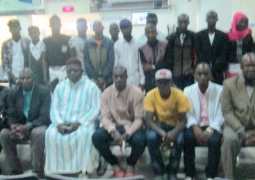