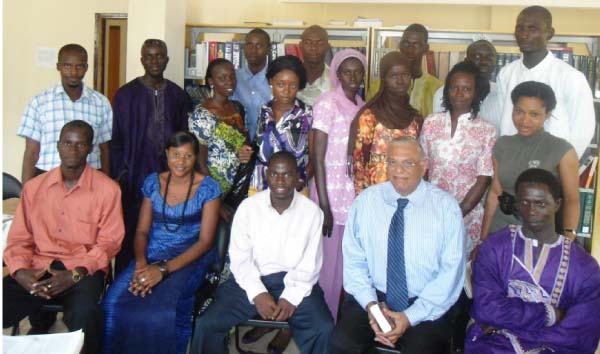 The American International University - West Africa (AIUWE), a private medical university operating in the country, has offered free two-year scholarships for medical degrees in nursing anaesthetics to 19 Gambian nurses currently employed by the Ministry of Health, as part of its assistance to the Government of The Gambia.

“We are trying to build the capacity of trained medical professionals, which is of immediate need to the health-care delivery system. We have indentified core areas, on which we are progressing right now,” he stated.

According to Dr. Shukla, the 19 students have completed nursing and are currently employed by the Ministry of Health working as nurses, but they need additional training to become qualified professionals in this health speciality.

“In order to do surgery, you don’t only need to help doctors, but need to help associated staff, among others,” he said, adding that this can only be done if you have trained and professional staff. This, he went on, is the reason why the university is offering free medical scholarships to these people drawn from across the country.

Dr. Shukla said capacity building is very important in terms of delivery of the health care system, and a vital component for nurses to undergo as they play an important role during surgery in assisting the doctors.

He noted that apart from the scholarships, the university is also working with the National Reference Lab to train nine students again as medical laboratory technicians, as well as clinical technicians.

He further told journalists that after the two-year course, the students will be full professionals in their various field of studies.

Dr Shukla also announced that, by next year, the university will be offering a two-year technicians program leading to the Associate of Applied Sciences (AAS) degree in bio-medical engineering, surgery technician, radiology technician, dental assistant program, pharmacy technician and laboratory technician, to students who have completed secondary school education.

This course, he added, is not only for The Gambia but Africa as a whole, noting that the university is working with funding agencies to see how they can fund these programs.

Recalling that the university signed an agreement with the Government of the Gambia in September 2010, Dr Shukla stated that few months after that, they started enrolling students.

Muhammed Sarr, nurse in charge of accidents and emergency and the outpatient department at the APRC General Hospital in Farafenni and Mbisin O. Jah, nurse in charge of cervival cancer at the RVTH, were at the news conference and commended the university and the Health ministry for the move.