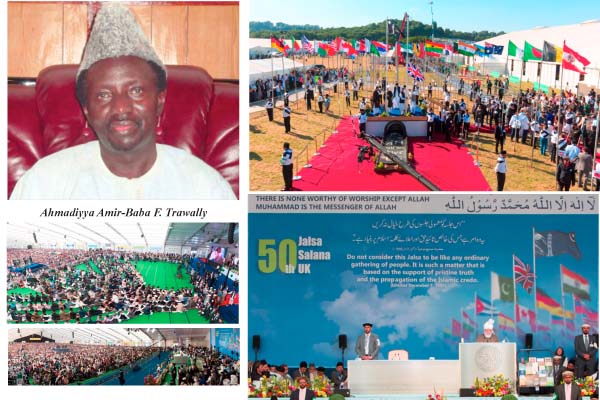 On Friday 12th August 2016, the Supreme and Spiritual Head of the Worldwide Ahmadiyya Muslim Jama’at, His Holiness, Hadhrat Mirza Masroor Ahmad, Khalifatul Masih Vatba delivered the Friday Sermon on the occasion of the 50th Jalsa Salana (Annual Convention) of the Ahmadiyya Muslim Community in the United Kingdom at the vast Hampshire farm known as ‘Hadeeqatul Mahdi’ in Alton, United Kingdom.

His Holiness reminded the attendees of the sole purpose of Jalsa Salana which is attaining the love and nearness of Allah Almighty, and His Holiness advised them to partake in the Jalsa and make it a priority to listen attentively to the speeches which can elevate them in their standard of spirituality.

Likewise His Holiness advised the speakers to deliver their speeches such that their main intention and purpose should be to provide a spiritual uplift for the audience and those watching from all over the world.

His Holiness urged the participants to recall that they have to forget their worldly objectives for the three days of Jalsa Salana and remain respectful towards the volunteers who have sacrificed their time and selves for the guests. Hudhuratba ended the Friday Sermon by telling all participants to keep praying, and the best way of praying is offering the five daily prayers, focusing upon supplications and offering voluntary prayers.

In the inaugural address later on Friday afternoon, Hadhrat Khalifatul Masih Vatba highlighted the essence of the Golden Jubilee Jalsa Salana of the United Kingdom which is different from the ways worldly people celebrate their golden jubilees, and that our purpose is to follow the practise of the Promised Messiah and Imam Mahdias on such occasions, the purely religious way by being grateful to Allah Almighty for the  blessings He grants on such occasions and to ponder over paying due rights to our pledge.

The main condition to fulfil our pledge according to His Holiness is to increase our level of righteousness, fear of Allah Almighty and our greatest responsibility towards Allah Almighty, which is to worship Him. His Holiness highlighted that true Islam means to follow the Holy Quran, the excellent noble of the Holy Prophet Muhammadsaw and to recognise and accept the Imam of the age, the Promised Messiah and Imam Mahdias.

We should pray to the extent that we even pray for our enemies, without which our hearts cannot be cleansed. This in fact is the example set by the Holy Prophet Muhammadsaw himself, he prayed to Allah Almighty to bestow guidance on his enemies and show them mercy, for they knew not what they were doing. Speaking about focusing our faculties towards dedication to Allah Almighty, His Holiness said that the only purpose of a worshipper should be to attain the love and pleasure of Allah Almighty. Virtuous deeds are hence performed for that sake, not necessarily because of Heaven or Hell.

True Paradise is in fact only found when one loves Allah Almighty in the true sense.  Therefore not only during the three days of the Convention, rather we should all keep bringing spiritual changes in our lives throughout the year, said His Holiness. People should always evaluate themselves instead of finding faults in others.

The Jama’at which is prepared by Allah Almighty is like a farm, therefore we should help the weaker brothers and sisters and strengthen them instead of pointing out their weaknesses. Directing his attention towards the recitation of the Holy Quran, His Holiness said that every Ahmadi Muslim needs to read the Holy Quran very carefully, because those who recite it as a story book never understand or comprehend its true meanings nor do they derive benefits from it.

The ladies of the Jalsa Salana were also blessed with the presence of His Holiness on Saturday 13th August 2016, and in His Holiness’s address to them, His Holiness said that Allah Almighty wishes that believing men and believing women should all understand the reason for their creation and that the reward for women is the same as for men, for the Holy Quran refers to all of them as believers. Those who raise allegations fail to realise that no other book before the Holy Qur’an has explicitly established rights of women.

Our women should not have any inferiority complex. Where media raises objections, women should voice out themselves that men and women are actually equal in the sight of Allah Almighty. His Holiness said that we are fortunate that the Promised Messiah and Imam Mahdias has, through the Holy Qur’an and the excellent practices of the Holy Prophet Muhammadsaw clarified all rights of women.

A woman has been granted rights that she can make her own living as a man does, but it is the man’s responsibility to take care of the woman. His Holiness concluded by saying that a time will come when the world will realise the weaknesses present in the so-called worldly rights they have granted to women, and at such times, only Islam will give the real solution to the problems. They will then apprehend the actual worth of Islamic teachings regarding women.

The Khalifa delivered another speech later on the second day of the Convention, in which as per tradition, His Holiness mentioned the general progress of the Worldwide Ahmadiyya Muslim Jamaat all over the world which included construction of mosques, mission houses, hospitals, clinics, schools, rendering services to humanity in various aspects among other things in different parts of the world, including Africa. By the grace of Allah Almighty, over 584,000 people joined the Ahmadiyya Muslim Jama’at last year and now the Jama’t is established in 209 countries all over the world.

On the third and final day of Jalsa Salana UK, Sunday 14th August 2016, His Holiness delivered the concluding address in which the Khalifa started by drawing the attention of the participants towards the condition of Islam in the eyes of the world today.

He said that people believe Islam is a religion which is disturbing peace in the world due to the killings that are taking place in the name of Islam. The cause of disorder is not faith said His Holiness, but the corruption or misinterpretation of faith. Islam spreads peace in all spheres through justice and security.

According to the Holy Qur’an, equity can only occur with complete justice, and humanity should be treated as one treats his or her own kith and kin. The Khalifa said that the Holy Quran teaches us that our parents are the foremost worthy of our respect after Allah Almighty, which is why they should be addressed with kindness and respect. This is why the Holy Quran teaches us to pray that Allah Almighty blesses them as they took care of us as children.

The first love however should be for Allah Almighty as Allah Almighty Himself established love in the hearts of parents in the first place. His Holiness continued that the Holy Prophet Muhammadsaw has stated that one can never repay the favours of parents.

His Holiness Hadhrat Khalifatul Masih Vatba emphasised that the peaceful society Islam wants to establish cannot be established until rights between parents and children are fulfilled. Explaining a verse of the Holy Quran (Chapter 17 verse 32) which teaches us not to kill our children due to fear of poverty, His Holiness said that we all know that no sane person physically kills their children, but not paying attention to their upbringing and training is tantamount to killing them.

Emphasising on the social issues faced by the world today, His Holiness reiterated the supremacy of the teachings of Islam over worldly policies and said that some countries made laws to prevent families from having multiple children. Now they have realised that such policies are incorrect, and same sex marriages will also show their negative outcomes after a few decades and they will be left to wonder.

The Holy Prophet Muhammadsaw is reported to have said that the best of you are those who have the best conduct and that the best men are those who are respectful to their wives. If there is no peace at home and there are differences between husbands and wives, then it can ruin peace within the family home and society at large.

Shedding some light on the subject of equality, His Holiness said that nobody can have superiority based on their nationality or their country or race. Superiority only comes from righteousness, that is the fear of Allah Almighty, not from the colour of one’s skin.

Our Lord and Creator is one, whatever position one may have, as a human being we are equal to one another. Islam strongly denounces racism and by submitting to Allah Almighty, peace and justice can be established. His Holiness said that the teachings Allah Almighty has given us are not to tarnish the character of others or mock other nationalities.

By the grace of Allah Almighty, this year’s Convention attracted 38,300 people from 96 countries of the world.

Various other distinguished guests spoke at the Convention, some of whom were there in person and others sent their messages to His Holiness and the attendees of the Convention. A message from Her Majesty Queen Elizabeth II was read out, British Prime Minister Theresa May, the President of Uganda who was represented in person by the Vice President of Uganda, President of Sierra Leone, Leader of the Liberal Democratic Party of Britain who sent a video message etc. Many respected guests were also in attendance some of whom were the Vice President of Uganda, Imam Ratib of Ghana, Deputy Speaker of the Sierra Leone Parliament, Members of British Parliament and other parliaments of other countries around the world, mayors from all over Britain including the mayor of Alton, where the Convention was held, , Secretary of State for Haiti, Benin Minister of Defence, Ministers in the British Government and other countries, Governors and other respected dignitaries.

The Amir Baba F. Trawally of the Ahmadiyya Muslim Jama’at The Gambia led a 34-man delegation from the Gambia to attend the Convention and they have returned safely by the grace of Allah Almighty. His Holiness Hadhrat Khalifatul Masih Vatba always prays for and tirelessly urges Ahmadi Muslims all over the world to keep praying for the Muslim Ummah and humanity at large for Allah Almighty to shower His bounty and mercy on the whole world and protect the world from afflictions and disorders of all kinds.

May Allah Almighty establish peace in our hearts, in our families and society at large. May the prayers of Hadhrat Khalifatul Masih Vatba be echoed and heard all over our country and the world at large and may we all be beneficiaries of the prayers of the Khalifa. May Allah Almighty fill our hearts with the light of faith and righteousness and continue showering peace, stability, security, progress and prosperity on our dear and beloved country The Gambia. Ameen.