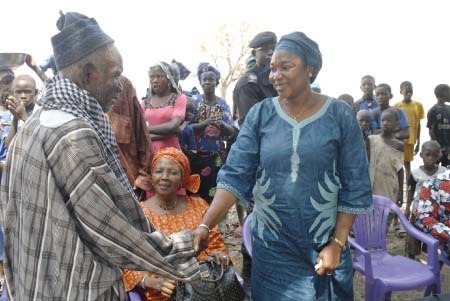 The minister for Agriculture Hon. Amie Fabureh has assured farmers in rural Gambia that the Ministry of Agriculture under her watch would ensure that their needs are addressed. She said there is already a technical and competent team of directors behind her who are able and willing to support her in this endeavour.

The agriculture minister made this comment while handing over agricultural equipment to women in Kani Kunda, Madina Sancha and Kwinella in the Lower River region on Monday 24 February 2020.

“I am very impressed with the team of directors. Together, we will move this sector ahead,” the minister said. She assured the farmers that before the commencement of the rainy season the government of The Gambia would provide fertilizers for all the farmers in this country. “You as farmers, you are very dear to the heart of President Adama Barrow and that is the reason his government is doing everything possible to support you,” she said.

The minister pointed out that the president is aware of the commitment of farmers in national development and that is the reason he (Barrow) provided the machinery. The minister also reminded the people of Lower River Region that since President Barrow did not forget them, they also should try to fulfill their promise in order to be self- sufficient in food production.

The governor of Lower River Region, Rohey John Manjang said empowering women and farmers’ means empowering the entire nation. She called on the people of the region to unite for development, while appealing to the men to support the women folks in all aspects. The governor said the government of The Gambia is very much concerned about the welfare of the farmers, thus the equipment given would no doubt boost the livelihoods of farmers in her region particularly the women folk.

Dr. Sanyang revealed that the Ministry of Agriculture has started rehabilitating all the mix farming training centers across the country. He said all these efforts are geared towards improving agriculture in The Gambia.

The director of Central Project Coordinating Unit at the Ministry of Agriculture, AbdoulieTouray, told farmers in Lower River Region that some projects have been approved recently by the lawmakers to improve the livelihood of farmers. He said among the projects approved is a small ruminants project. Touray assured the famers that the project would enhance the rearing of small ruminants in the country.

The minister was accompanied by Musa Humma deputy permanent secretary (Technical) at the Ministry of Agriculture.