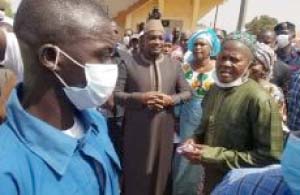 The presidential largesse is for the distraught fire victims most of whom were rendered poor by the inferno that lasted several hours despite the combined efforts of various fire fighters within the Central and Upper River Regions.

In a sombre statement, President Barrow appealed to Gambians, members of the business community and humanitarian organisations to generously come to the rescue of the fire victims most of whom have been ripped off of their lifetime earnings within hours.

President Barrow who lived in Basse during his formation years recalled with great nostalgia, the significant role the town and its people contributed to his personal development. ‘The two million dalasis I donated are from my personal funds, they are neither the government nor my party’s and therefore, it should not be politicised’, Mr. Barrow cautioned.

Mr. Barrow promised that in the near future, his government will construct a modern market equipped with all the fire hydrants and exit routes to replace the burnt and dilapidated structures of the old market.

Meanwhile, in the past week, several stories have been bandied around either misrepresenting or underreporting the exact amount of funds donated by President Barrow. For purposes of accuracy and to keep the records straight, there were no pledges nor installments as was falsely reported, Mr. Barrow himself presented the D2 million to Governor Manneh in the full glare of TV and media cameras.