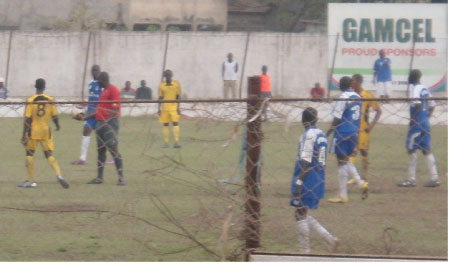 Steve Biko Football Club of Bakau have blown away yet another chance to improve on their woeful performances in the GFA division one league championship which saw them fail to win in eleven matches  played in the first round that has ended.

The Bakau giant killers, as they are known, have proven to be the most disappointing team in the twelve-club championship having failed to record a victory going into the second round with a massive task for survival.

Their latest draw came against bottom-place occupant Interior who held them to a hard fought 1-1 draw in the last game of the first round at the Serrekunda East Mini-stadium on Sunday.

It was the draw specialist Interior who first made their winning ambition known when they opened the scoring through Bakaramo Ceesay from a penalty spot with only 3 minutes on the clock.

But their celebration only lasted for few minutes as Bakau giant killers responded courtesy of Papa Salifu Badjie's injury time equalizer when the former U-17 defender converted from a penalty spot to put coach Abdoulie Bojang and his charges back into the game before a group of noisy Biko supporters at the Serrekunda East Mini-stadium.

Biko continued to mount heavy pressure on the Interior defence and their struggle was finally rewarded with an equaliser at the stoppage time when Salif Badjie fired home from a penalty spot following a goalkeeping blunder from the Interior’s side, who were also reduced to ten men with the score tied at 1-1.

Bojang and his lads began the 12-club league campaign with a pulsating goalless draw against in-form Brikama United in the opening game of the league before playing a hard fought 1-1 draw with bitter foes Wallidan in the second game of the campaign, followed by another action-packed 1-1 draw against the telecommunication giants Gamtel at East-park.

They have continued to collect many draws and some defeats securing only six points in the process.

"It was not a convincing first round performance considering the number of defeats, draws and points we collected but we can come back and win six or seven games in a row to move few steps up with hard work in the second round," says Biko's assistant coach Babucarr Borris Demba shortly after his side's 1-1 draw against the draw specialist Interior in the final game of the first round at the Serrekunda East Mini-stadium on Sunday.