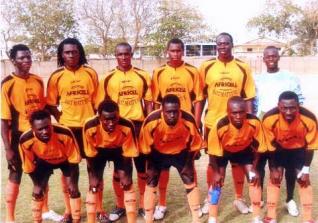 Ebrima Jallow, head coach of Africell FC, has said he was very happy they collected the three points against Armed Forces in the battle for survival at the GFA 1st Division League on Wednesday.

“We will do everything possible to save this team from relegation,” he said. “We believe that we will stay in the first division league with the encouragement we have put in the players and the way we train.”

His compatriot Yunusa Barry, assistant coach of Armed Forces, after the defeat, said: “It is becoming more difficult for us but we are still on the right track for the title race. Football is some times luck.”

“We injected young players in the team and I think experience is lacking in them but come next year they will be much sharper,” he said.

Asked about his rating of his opponents, he said: “Africell played well in the first period of the game but the second half was dominated by us because we talked to the boys during the break and also made some changes.”

Yankuba Jammeh, the goal scorer of Africell, said he was happy to score the only goal of the game that earned his side the vital three points, adding that their aim is to get out of the position they are in at the moment.

“Every game is a final to us and we want to win every game,” he says. “Some times we blame coaches for teams’ failures while it is the lack of commitment of players.

“Some players some times run away from responsibilities of big games by not performing to expectations or taking an excuse of having an injury.”

Citing the commitment of team members, Jammeh said that after every training session players sit and discuss among themselves on the way to save the team and also on the performance and behaviour of players in certain games.