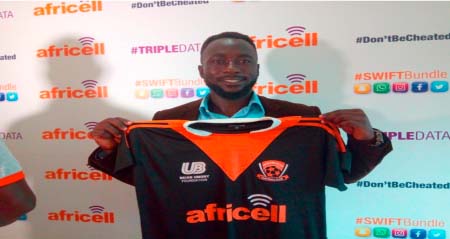 Speaking at the presentation ceremony held at the company’s head office on Kairaba Avenue, Musa Sise Communication Consultant Africell said the company has sponsored nawettan zones in the Greater Banjul this year.

He stated that zones and Super Nawettan Organising Committee (SNOC) will both receive preparatory fees for the annual championship.

Sise appealed to the zones to maintain discipline during the tournament, noting that Africell will continue to support sports development in the country.

He called for trouble free super nawettan this year, adding they have signed a three-year contract with the Super Nawettan Organising Committee (SNOC) for the sponsorship of the country’s esteemed community biggest football fray.

He urged the zones to send the names of players to Africell for some benefits during the super nawettan, adding that they have been supporting sports in the country for many years now.

Operation Director Africell, Hussein Diab said the company is not only about technology, noting that they also support sports in the country.

He revealed that their aim is to bring together communities.

He urged zones to maintain discipline during the tournament and applauded Africell for bankrolling this year’s super nawettan competition.