Speaking at the ceremony held at Ghana Town Community Centre in Brufut, Pastor Karamba Jassey, board chairman of ADRA, said open defecation is not only an affront to personal dignity, it perpetuates the vicious cycle of disease and poverty.

The risk of water contaminated by bacteria, viruses and amoeba is increased manifold, which causes diarrhoea, he said.

According to Pastor Jassey, ADRA Gambia recognizes this global and national sanitation event by joining the Government of The Gambia and the entire people of Ghana Town as they marked this year’s World Toilet Day meant to create and raise awareness on toilet use.

“We appreciate the participatory approaches to sanitation that the government is undertaking to address the plight of all those who still don’t have toilet facilities in the country,” he added.

According to Jassey, the toilets have to be maintained and must have water at all time, noting that these toilets are built with donor funding and must be maintained to attract more funds from the donors.

Jassey explained that the challenge is to radically increase toilet use, adding that ADRA Gambia was proud to have led the adoption of community-led total sanitation (CLTS) as an approach to addressing sanitation challenges in Ghana Town.

He assured that as an organisation they would continue working with the government to contribute their quota to national development.

With this project their intention was to rapidly increase sanitation coverage in intervention areas through CLTS scale-up and thereby secure the dignity of children, families and communities and their right to safe, adequate and improved sanitation, he noted.

Tetteh explained that his organisation has been operating in The Gambia since 1984 and has developed its expertise in these sectors and in various sub-sectors.

In a need assessment conducted by ADRA Gambia, it was discovered that the community is facing a bad WASH condition as 83 per cent of the residents do not have proper sanitation facilities and about 78 per cent of the population including children, practise open defecation in near bushes, Mr Tetteh said.

According to him, 24 per cent of Gambia’s population does not have access to proper sanitation, including toilets or latrines, which have dramatic consequences on human health, dignity and security, the environment, and social and economic development.

He challenged the people of Ghana Town to take good care of the facilities so the young ones could benefit from it. 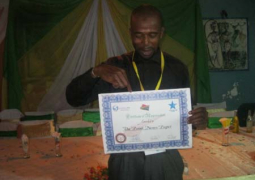