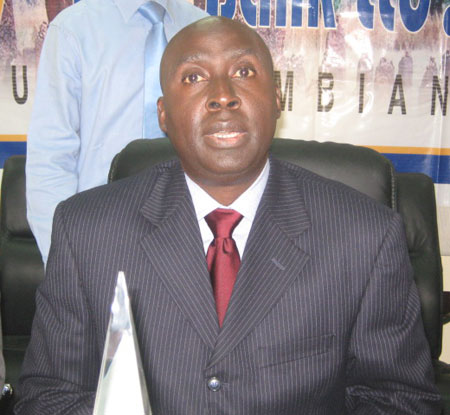 When Trust Bank Limited started operations in the country's growing banking industry some 13 years ago, it was a unique beginning. The bank made a pledge to Gambians and even non Gambians alike living in the country that it would provide sound, convenient and reliable banking services backed by remarkable corporate social responsibilities. It pledged to bring banking services to the door steps of its ever growing customers across the country.

Today, the bank has delivered on its promises so much so that it has even gone beyond. The bank today employs nearly 300 people and a management team consisting of highly experienced Gambians who have a very strong knowledge of the banking industry. The shareholding is in the hands of institutional investors, both local and foreign, individuals and employees of the Bank.

With its Head Office located at 3-4 Ecowas Avenue Banjul, Trust Bank operates 13 branches in the length and breadth of the country and in advance stages to open more locations before the end of 2010. The bank offers a wide range of products and services that serves the needs of its individual and corporate clientele. In the last few years the bank has invested significant amount of fund to leverage on superior technology to provide more access and convenience to our customers both home and abroad.

Being highly cognizant of the bank's contribution to the socio-economic development of this country over the years, the Gambia Chamber of Commerce and Industry last Friday singled out Trust Bank out of a really formidable list of banks operating in the country and awarded it as Bank of the year 2009.

Speaking at a press conference held at the bank's head office in Banjul yesterday, Pa Macoumba Njie, Managing Director of Trust Bank Limited re-iterated the bank's pledge on inception 13 years ago, that it remain passionate as ever to bring banking to the doorstep of every Gambian both home and abroad; by leveraging on superior technology to provide specifically targeted products to its customers, delivered by a highly dedicated and well trained team.  In so doing, Managing Director Njie added, the bank provides excellent returns to its shareholders and giving back in a deep and meaningful way to the community.

He commended the staff of Trust Bank, whose loyalty and dedication, he said, has propelled the bank to its current position. "We thank the Government for its foresight and proactiveness that has made The Gambia such a magnet for foreign direct investment; and for creating the favorable climate for business to thrive and prosper in this country," he said, while also thanking the Central Bank of The Gambia, for their expert supervision and the maintenance of the trust and confidence in the system which is a prerequisite for a successful industry.

On behalf of the Board of Directors and management of Trust Bank, we would like to take this opportunity to thank our valued customers who are primarily responsible for bringing us the success over the years that has made such an award possible.

Trust Bank Managing Director on behalf of the Board of Directors and management of the bank, thank their valued customers who, he added, are primarily responsible for bringing the success over the years that has made such an award possible.

According to him, they at Trust Bank have a lot of faith in the uniqueness of our offering to the market and are extremely delighted that their unique brand of banking continues to strike a cord with the consumers in this country.

"Trust Bank Ltd is really honored to receive this prestigious GCCI bank of the year award. We thank the GCCI and its members for singling out Trust Bank out of a really formidable list of banks operating in this country," MD Njie concluded.

After 13 years of successful operations, Trust Bank today stands out as a bank that contributed and continues to contribute heavily in the areas of Health, Education and Sports.

In addition to the refurbishment of RVTH Sanatorium in 2007-2008 at a tune of D4M, Trust Bank Limited constructed a new dining hall and laundry room for the RVTH Sanatorium at a cost of D1M. Other beneficiaries of the bank's benevolence to the health sector were the APRC hospital in Farafenni,

In the area of Youth and Sports, the Bank continued to make donations to Secondary School sports, U17 National Team, private and public sector football tournaments as well as to the National Youth Service Scheme.

In the field of education, the bank once again awarded prizes to deserving students from Secondary Schools as part of the Excellence in the Millennium Award Scheme and the prices for students were increased to D6,000 each and three schools were awarded D15,000, D10,000 and D5,000 respectively for producing the best outstanding students.

The bank's Corporate Social Responsibility objective is to empower the nation through building a stronger, healthier and educated populace. Trust Bank spent far more than any of its competitors towards the social-economic developments of The Gambia that it continues to touch every Gambian either directly or indirectly.

Trust Bank also donated D1M to the Rotary Club of Banjul for their Science Laboratory Project. The bank has since inception been awarded numerous prestigious awards from The Government of The Gambia, local and international institutions the latest of which are: National Order of the Republic of The Gambia (MRG), Bank of the Year 2009 - GCCI, Bank of the Year for The Gambia - The Banker (UK) and Best Bank Award - 2008 by Global Finance.