International aid agency ActionAid has started distributing emergency food and medicines in , according to a press release from ActionAid.

The organisation has sourced supplies of foods, including flour, sugar and rice in and will be delivering them to the disaster-affected areas as soon as possible. It has also found a suitable warehouse to store the emergency items and planned to distribute water purification tablets to 9,000 people yesterday.

According to the release, the agency plans to help up to 20,000 people overall in its emergency response.

Jean Claude Fignole, ActionAid's country director in , said: "Aid is getting to the people who desperately need it."

"The people we work with are getting high-energy emergency food until supplies of flour and cooking oil arrive in the next few days."

"They're drinking water direct from a stream and a spring near their makeshift camp, so we'll be giving out water purification tablets, to make sure people have safe water and to reduce the risk of disease."

"Our office was made unsafe in the earthquake, but we have got a makeshift office working in the garden of a colleague. Communications are slowly improving and we are getting aid from the outside world onto the streets of ."

"This is only the start. There is so much more to do," he stated.

On Monday ActionAid gave 2,500 people emergency food supplies and medicines in the Mariani area of . It is currently the only aid agency to work in this area.

Over the coming week, ActionAid will bring in the following emergency supplies: 3,000 tents, 20,000 blankets, 1,000 boxes of nappies and 9,000 foam mattresses. Extra emergency staff have been sent to the area to help deliver the aid.

ActionAid will also be looking at protection of vulnerable sections, such as women, children, the elderly and persons with disabilities, the release announced. 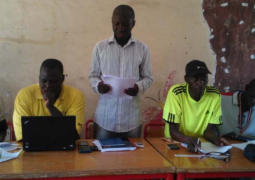