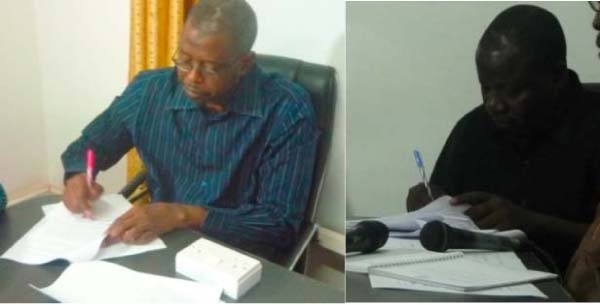 ActionAid International The Gambia yesterday signed a contract agreement with community radio stations across the country for the dissemination of HIV and AIDS messages to the public.

Speaking at the signing ceremony, Omar Badjie, Executive Director of ActionAid International The Gambia, said the focus is on the prevention of HIV and AIDS new infections.

He noted that this is critical because they all know what HIV and AIDS could do to an economy, and that they want to prevent that from happening in the country.

He added that one key thing in prevention is about talking to people using the right messages.

The messages were designed and developed around the three core areas, he added.

“We are using community radios and in that partnership there is need to be trusted and dependability.”

Badjie appealed to community radios to be trustworthy, as well as keep their promise as stated in the agreement, particularly in ensuring they stick to the time schedules they have agreed on for the messages to be aired.

Mr Badjie also called on journalists to be responsible in their reporting, because by telling people the right thing they will take the right decisions, which would help all, as a nation, in terms of keeping HIV and AIDS under control.

Also speaking at the ceremony was Bai Cham, HIV and AIDS Project Manager at ActionAid International The Gambia, who said they developed and tested messages that would be used in the mass media in the prevention of HIV and AIDS infections in The Gambia.

He said people want to listen to these messages through radio stations, according to their findings.

“The objective is to inform people to reduce new infections of HIV and AIDS in The Gambia.”

He expressed delight on behalf of community radios for being the first focal points of the message dissemination.

He assured ActionAid that they would keep to the promise of ensuring the messages reach across the country, as they are not looking at the monetary terms, but the impact the messages will have on society.