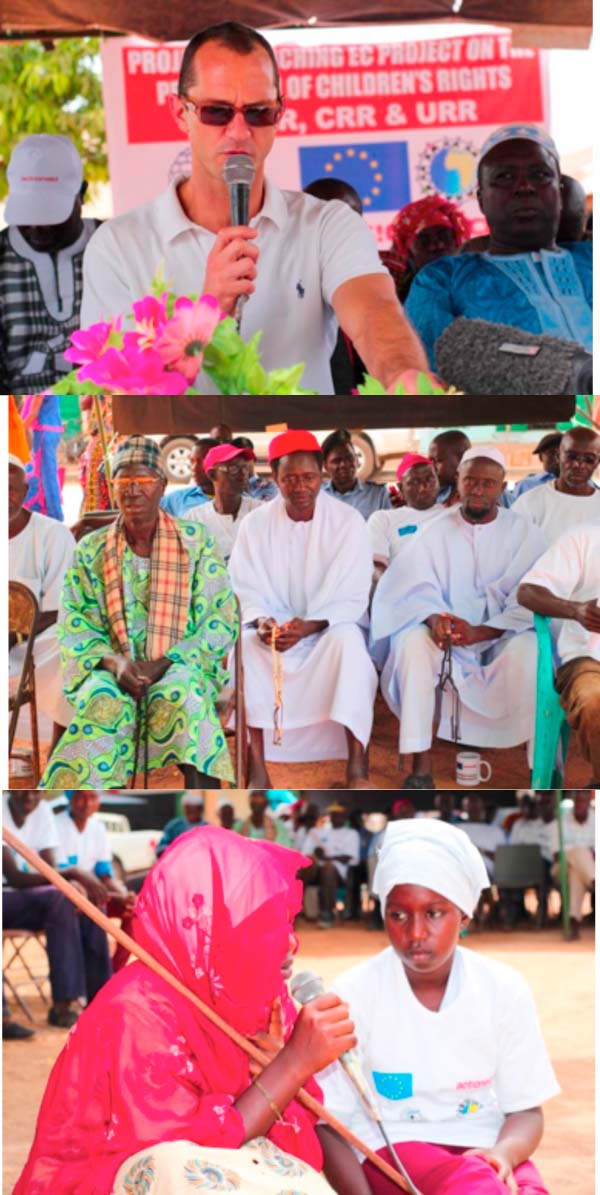 Action Aid International The Gambia in partnership with the Child Protection Alliance (CPA) and FAWEGAM have jointly officially launched the project entitled “Empowering Child-focused Organisations to Promote Children’s Rights in 3 regions of The Gambia, LRR, CRR and URR”.

The launching ceremony took place in Soma in the Lower River Region on Thursday 9th June, attended by the Governors of the three regions being targeted, traditional and religious leaders, and senior government officials from various sectors and students. The project worth 400,000€ (approximately D18 million dalasi) is co-funded by the European Union (EU) and ActionAid.

The Child Protection Alliance (CPA) and the Forum for African Women’s Education Gambia Chapter (FAWEGAM) will implement the project under the overall supervision and management of ActionAid. The three year project aims to contribute to the promotion of children’s rights in The Gambia to ensure that their rights and needs are respected and fulfilled in the 3 regions. The targeted regions of LRR, CRR and URR have the highest prevalence rate for child marriage, Female Genital Mutilation/Cutting, low birth registration rates and educational attainment for children well below the national average. The project directly targets children in and out of schools including those with disabilities, religious/traditional leaders, women leaders, school authorities, parents, members of women’s groups and child protection committees, area Councilors, media practitioners, legal practitioners, law enforcement agents, female circumcisers/traditional birth attendants, policy makers and legislators.

At the launching ceremony, Mr. Josselin Amalfi of the EU delegation in The Gambia representing the Head of the Delegation noted that the EU has a long standing relationship with civil society in a wide range of sectors and themes, including child protection, gender empowerment, economic development, education and health, among others. “ActionAid, the Child Protection Alliance (CPA) and FAWEGAM are reliable partners with proven excellent capacity to support and protect child rights in The Gambia”, he said.

The Governor of LRR Salifu Puye made mention of free education, the Children’s Act 2005 and international conventions such as the Convention on the Rights of the Child, the African Charter for the Rights and Welfare of the Child as testimonies of government’s commitment to the promotion of children’s rights. “The children in the rural areas are not exposed to opportunities like their peers in the urban areas. Therefore this project is indeed appropriate and timely to open up opportunities for children”, Governor Puye noted. He urged everyone to become involved in supporting and shaping children as they will become tomorrow’s future leaders.

ActionAid’s Executive Director Omar Badji emphasized that his organization, as a duty bearer, does not want to be judged by posterity for not fulfilling its commitment and duty. “We are aware that promoting children’s rights should be critical aspects in our daily lives. Not fulfilling these rights is a violation of our commitment and human rights”

In her vote of thanks, Isatou Kijera, a student from Pakalinding Upper Basic School urged her fellow students to be well prepared if they are expected to lead the country tomorrow.

It is expected that at the end of the project, civil society organisations will have the capacity to  advocate, participate and monitor the provision and enforcement of policies and laws for child rights protection, children including girls and the disabled will be aware of their rights and how to seek redress, regional referral, documentation and monitoring mechanisms between key actors will report child protection concerns and policy makers, legislators, law enforcement agents, legal practitioners and women leaders become champions and public voices for the protection of child rights.