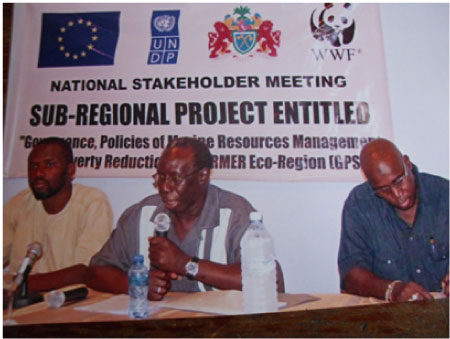 A draft national action plan for the implementation of the sub-regional project entitled “Governance, Policies of Marine Resources Management and Poverty Reduction” was over the weekend validated by stakeholders at a forum held at Baobab Holiday Resort in Kololi.

The validation forum was held under the auspices of World Wide Fund (WWF) Banjul office and tabled a 48-page document with an overall objective to reducing poverty and enhancing food security for the benefit of coastal communities in West Africa Marine Eco-Region better known as (WAMER).

Its specific objective is to improve governance and promote adoption of best practices for sustainable use of marine and coastal resources in the WAMER eco-region, said Ousman Drammeh, BaNafaa/USAID project coordinator.

According to him, the project has a lifespan of four years and will be implemented in the seven countries of the sub-region, namely Mauritania, Senegal, Cape Verde, Guinea-Bissau, Sierra Leone, Guinea Conakry and The Gambia.

The project is funded by the European Union (EU) to the tune of 10.5 million Euros including 500,000 Euros co-funding from the United Nations Development Programme (UNDP) and World Wide Fund (WWF)-West Africa Marine Programme Office (WAMPO) Dakar based office who are the recipients of the award.

He said interagency Memorandum of Understanding will be signed by the implementing parties such as the UNDP, the WWF and the national implementing NGO teams.

The expected result, Drammeh highlighted, is to ensure a sub-regional action plan is developed to reduce or eliminate the negative impacts of modes of governance, and marine and costal resources management is developed and implemented.

He said they also looking forward to seeing that tools and initiatives for sustainable marine and coastal resources management in the WAMER eco-region are implemented.

“The capacity to influence policy by civil society (NGOs, professional organizations, networks of journalists) and parliamentarians active in the fishing and environmental sector are implemented while income-generating activities and environmentally friendly livelihoods initiatives are supported, are also part of the expected result,” he stated.

The project will have a coordinating unit both at local and sub-regional levels, he said, adding that all partners will be fully involved throughout the implementation processes of the project.

In a speech delivered on behalf of the minister of Forestry and the Environment, Lamin Jawara, deputy permanent secretary, hailed the two national consultants Matarr Bah, lead consultant, and Dawda F. Saine, associate consultant, for preparing what he called a ‘good’ documents for the country.

He said the consultants have worked very hard to produce an ‘excellent’ first draft of national plan.

While anticipating a successful outcome of the meeting, Jawara encouraged stakeholders to make sure that all the activities proposed in the action plan are concrete and relevant to national priorities which ‘complement’ and do not contradict national development blueprint, citing Vision 2020, the Programme for Accelerated Growth and Employment (PAGE) as well as relevant environment and fisheries policies, strategies and laws.

Highlighting some of the key challenges, DPS Jawara said this include fisheries crisis due to overexploitation and degradation of marine and coastal environment, failure of policy and public and private institutions competing for scarce resources, and lack of coherence between the different sectors of the economies sometimes negatively impacting on food security initiatives and poverty reduction among others.

Ecosystem, he went on, underpins all human life and activities, noting that the goods and services they provide are vital to sustaining the national well-being and the future economic and social development.

“It’s a sad reality that human activities are continuously destroying biodiversity and altering the capacity of healthy ecosystems to deliver this wide range of goods and services, and as consequences of our activities we are endangering our existence and survival,” he told stakeholders.

“Knowing the caliber of representation here today, I am convinced that The Gambia will receive its fair share of the EU funding by elaborating a national action plan that will rank supreme above the other national plans,” he stated.

Hand of justice catches up with Kololi Beach Club