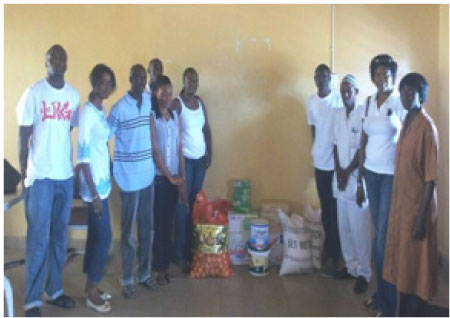 Eight staff members of Access Bank mainly from the bank’s public sector and operational unit and the Banjul branch on Saturday donated some foodstuffs and other items to the Tanka Tanka Psychiatric Hospital.

Speaking at the presentation venue, Dede Nal Williams, Head of Public Sector Banking, said the gesture came from selected staff from the public sector and operational units and some staff at their Banjul branch.

She noted that they work for institutions and believe in sharing their resources with the communities, especially people at the psychiatric hospital.

She commended staff of the psychiatric hospital for taking care of patients admitted there, noting that some have relatives to take care of them, while others don’t have.

“We want to thank you so much so that others can emulate this,” Williams said, assuring them of their support to the hospital.

Receiving the donated items, Cherno Jallow, a staff of the psychiatric hospital, commended the donors for their support.

He further described the gesture as “very timely and valuable” to the hospital. “Recognizing the need of the patients and coming to their aid is very vital,” he noted.

Speaking to this reporter, Austin Jones, Head of Corporate Affairs of Access Bank, said they usually contribute to support people and that this year their choice was Tanka Tanka Psychiatric Hospital.

He added that at Access Bank, part of their requirement is to promote and contribute to corporate social responsibility.