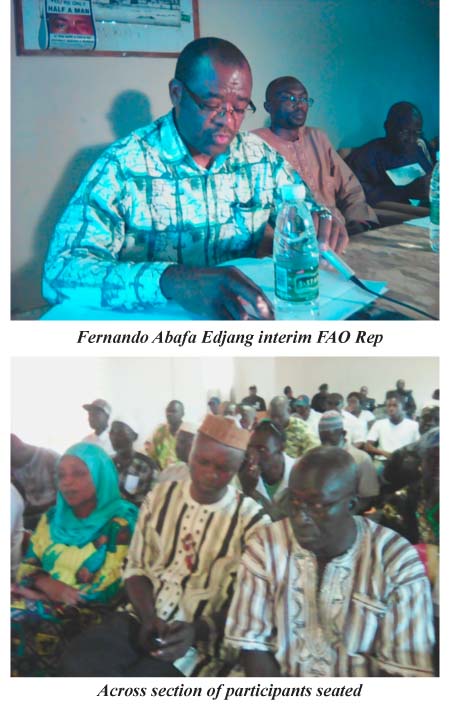 The livelihood of communities in these zones (Sahelo-Sahara) is heavily reliant on limited and degrading of degraded soils, water and vegetation resources, according to Fernando Abafa Edjang, who was speaking at the official launching of Action Against Desertification.

Held at Kerewan in the North Bank Region, the launching of Action Against Desertification was in support of the implementation of the Great Green Wall for the Sahara and the Sahel Initiative (GGWSSI) and South-South Cooperation in ACP countries.

According to him, the objective of the initiative is to arrest the advance of the Sahara Desert south and north wards, and to improve the livelihood of the inhabitants of the Sahelo-Sahara zone, being one of the most negatively affected in Africa.

He added that the initiative had economic dimensions in providing opportunities for income-generation and poverty reduction, through the promotion of community-based enterprises development, and a social dimension too in promoting environmental awareness in community settlements and school environments.

The Great Green Wall for the Sahara and the Sahel initiative should not be conceived as planting trees in a straight line across the African continent; but rather a combination of inter-related set of activities and actions towards resolving the problems of resource degradation and people’s livelihood that requires multi-sectoral responses and interactions.

“This ceremony does not only reflect the confirmation of the international community and development partners urgent concerns in respect of the adverse effects of desertification and drought to the planet, but also our determination to reinforce our efforts as partners to combat and reverse the process.”

He added: “In order to protect the ecosystems and promote sustainable development, various initiatives and actions are being adopted by the international community and individual affected countries, with specific objectives to counteract the effects of desertification, land degradation, biodiversity loss and climate change through various initiatives, including the adoption and implementation of the three Rio Conventions (United Nations conventions on Desertification, Climate Change and Biodiversity).”

He noted that within the partnership framework, in July 2005, former president of the Federal Republic of Nigeria, Olusegun Obasanjo, proposed to the 5th ordinary summit of CENSAD an initiative for the establishment of a Green Wall for the Sahara and Sahel Region.

He made reference to the Gambia government’s efforts in addressing the challenges posed by desertification and land degradation.

Forest resources management in developing countries, in general, and Africa, in particular, had been characterized by extensive state involvement, without much recognition of the potential and involvement of the local communities, and The Gambia is no exception.

However, he added, there was a paradigm shift in the last two decades, from the state being the single responsible authority and custodian of forest resources and its management in this country, to more community involvement and partnership.

“As a result, we are aware that government has since then embarked on developing strategies and implementing activities, to deal with the associated challenges such as deforestation, degradation of agricultural lands and biodiversity loss through the participation of local communities, who are equally committed and have experience in bringing about sustainable forest and land resources management.”

Such actions include community participation in resource management, such as sustainable community forest management of 31, 682 hectares, which are currently under communal management in all the regions of the country.

However, he said, more efforts are needed in order to ensure the attainment of the Gambia forest management concept objectives, which call for 200, 000 hectares to be under sustainable community management by the end of the forest policy period (2010-2019).

“It is within this framework that FAO as executing agency in partnership with African Union Commission, EU, ACP secretariat and other development partners supports government of The Gambia through the implementation of Action Against Desertification project.”

This is an EU-ACP funded project which is a direct contribution to the implementation of the Great Green Wall for the Sahara and the Sahel Initiative, he said.

He added that the project is a pan-African programme launched by the African Union with the aim of addressing poverty, hunger and the impacts of climate change in the dry zones of ACP countries, through sustainable land management approaches being implemented in six Africa countries namely, Nigeria, Burkina Faso, Ethiopia, Niger, Senegal and The Gambia.

According to the FAO official, it is expected to protect and restore ecosystems and essential ecosystem services that are key to reducing poverty, enhancing food security and promoting sustainable livelihood.

Food insecurity, poverty and unemployment, which negatively affect the livelihood of the rural communities, would be addressed through enhanced farm production and productivity, as well as through development of community-based enterprises for wood and non-wood forest supplies.[endif][if gte mso 9][endif][if gte mso 10] [endif]
Share Article
Share on Facebook
Share on Twitter
Share by E-Mail
Share on Pinterest
Share on LinkedIn
Share on WhatsApp
Previous:
Gambia to recommence training for African U-20 Qualifiers 2nd leg with Morocco tomorrow
Next:
Battle for survival in GFF 1st domestic league set for Sunday