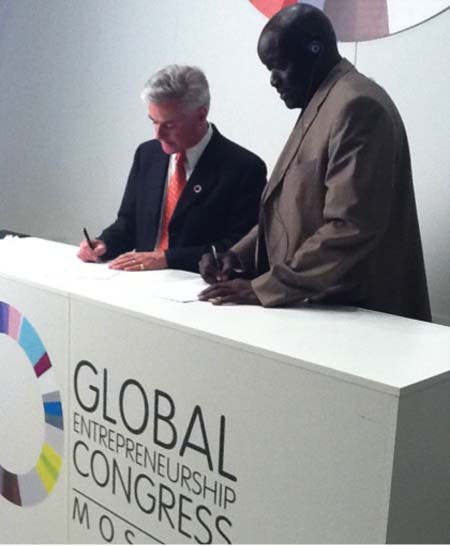 Mr. Abdoulie ‘Baks’ Touray, president of the America Chamber of Commerce in The Gambia, represented the chamber at the recent Global Entrepreneurship Congress held in Moscow, Russia.

The chamber was established about four years ago to promote a business relationship between the Gambia and US, particularly working on the theme of Entrepreneurship.

Speaking to this reporter at his office at the Sahel Group along the Kairaba Avenue, he said the congress brought together participant from countries all over the world.

The Global Entrepreneurship Congress seeks to promote entrepreneurship around the world, and their primary mandate is to get people to think creatively and productively, to see ways and means in which both young and old people can develop the culture of entrepreneurship.

The congress was hosted by the Russian government (the mayor of Moscow), and discussed all areas dealing with entrepreneurship relating to technology, food security, energy, telecommunications, infrastructure, among others.

Mr. Touray said, on the sidelines of the meeting, they also had an initiative called Lions of Africa which is supported by the Africa Development Bank, the Bill Gates Microsoft Foundation, the US State Department, as well as the Coughman Foundation.

Global Entrepreneurship is supported by the Coughman Foundation, which is one of the largest foundations in the US devoted mainly to entrepreneurship development, he said.

“That initiative is basically to get Africans to think about how we can accelerate the pace of growth in Africa, particularly giving that most of the high growth countries are now found in Africa”, he went on.

“Within those discussions, I was selected to coordinate the activities of the ECOWAS countries so that we can try to leverage on entrepreneurship, particularly across the whole spectrum of society, but with special focus on universities and colleges, and also filter the program around to different walks of life”.

The idea is also to get the media to be much more interested in disseminating information on entrepreneurship, he continued.

“Within that mandate, the next focus group will be on women’s entrepreneurship to take place in Sweden sometime in October (2014)”, he announced.

They will be disseminating information throughout members so that they can get a good cross section of Gambian women entrepreneurs - both those that are active and those that want to be entrepreneurs - to get involved, according to Mr. Touray.

His task as the first regional coordinator for the ECOWAS countries under the Lions of Africa program, will be to get the universities and colleges and all those that are interested in entrepreneurship to look at the website that are being developed purposely for them.

In addition, his task includes giving them training possibilities, as well as counseling possibilities to look at entrepreneurship as a veritable tool for economic development.

“What is interesting to note is that within the MDGs, MDG number one which all countries have agreed upon is the need to alleviate poverty, and we all know that poverty can only be alleviated through the creation of wealth. It is the entrepreneurs that create wealth, as they are also the ones that add value”, Touray pointed out.

All they are trying to do is sensitise on this, and try to increase the level of awareness as far as entrepreneurship is concern.

The Gambia will benefit in that they will be engaging the tertiary institutions in The Gambia, as they as well intend to leverage opportunities, as entrepreneurship is a subject hardly taught in schools, he further stated.

“What we want to do is, hopefully, start with the University of The Gambia and other tertiary institutions, so that we can encourage them to think creatively, and to add value to everything we do in relationship to building entrepreneurship not only in The Gambia, but develop the same capacity in other countries”, Mr. Touray added.

He said by logging on to www.africa.co this will give you the whole concept of what the project is about, and the opportunities available.

They have also come up with a new initiative, called the creative business scope, whereby people are given the opportunity to think and come up with ideas in terms of how the human being endeavours to enhance. This can be done by coming up with creative concepts in different fields of life that can improve the human life.

“I have the belief that we are in this world to give back to society; so the little exposure, information, knowledge we have we should share it with society, particularly the young ones so that they can be better human beings”, he responded, when asked what his new selection as coordinator for the ECOWAS countries means to him.

He described the outcome of the Moscow congress as quite positive, adding that they also had the opportunity to formally sign an MoU with the President of the Global Entrepreneurship Congress, Jonathan Odmans, who they were privileged to meet. The Global Entrepreneurship Congress president is very keen and personate about Africa, because he informed him (Touray) that he was born in Africa. Mr. Touray also said he had the opportunity to interact with the mayor of Moscow, and gave him a present in appreciation for Moscow’s hosting of the congress.

“They have the possibility of wanting to engage with Africa, so in terms of the benefits, the idea is that they believe we can make a contribution in the area of entrepreneurship within the ambit of the America Chamber of Commerce”.

The ACC president encouraged people to go to the chamber to find out what possibilities there are for them to engage.

One of the things they are also trying to do is that members of the press are engaged, so that they can be exposed to entrepreneurship development and training, to enable them disseminate appropriately the information on entrepreneurship, he added.

Going forward, they will have media partners so that “we can engage them and for them to be closely associated with our activities, and for us to also expose them to things we are trying to do both locally, regionally, continentally and by extension the world."

“We have our Vision 2020 in The Gambia and it says the private sector is the engine of growth; so the private sector needs to be encouraged”, he pointed out, adding: “Development and the way to develop it is to make sure whatever regardless of our discipline you are in, you add value to what you are doing”.

“Poverty is one of the things that is affecting the whole world, and I have always maintain that poverty cannot be shared, it is wealth that can be shared, and it is entrepreneurs that create wealth”, Mr. Touray further noted.

The next Global Entrepreneurship Congress, of which the America Chamber of Commerce is a member, meets yearly and will hold its summit in Milan, Italy, in March 2015. 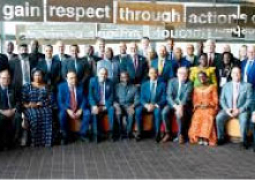 Rohey M. Lowe signs global city treaty that intends to leave no one behind