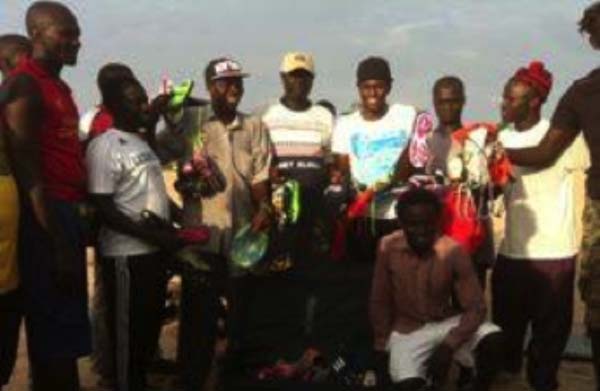 Gambian international Abdoulie Kenny Mansally has donated football boots and balls to the Gunjur Sports Committee, as part of his foundation’s efforts to promote and develop football in the country.

The presentation ceremony was held at the Gunjur Nyamina football field, on Tuesday.

Gunjur Sports Committee applauded Kenny Mansally for his benevolent gesture, while assuring him that the donated items would aid the committee in their efforts to develop football in Gunjur and its satellite villages.

Mr Mansally expressed his delight in donating the football materials to the people of Gunjur, the first time he has done so.

“My foundation started just last year, but we are doing our quota in trying to support many areas in national development,” he said. “I can see a lot of potentials in Gunjur, and all they need is the support and I and my foundation will be bringing more materials in the near future.”

Mansally said his foundation does not only support football, but also extends support to school-going children at nursery school level, and the sick.

“I have a huge package for December or early next year when my foundation will launch its fund raising campaign, and the proceeds gained from that campaign will be used in other developmental areas.”