Abdoulie Bangura, the team Manager of the Gambia U-17, has once again been honoured with another leadership role by club representatives in Bakau, in recognition of his continuous support and contributions to the development of sports in the area. He was unanimously elected at a congress held at the Bakau Conference Hall in Newtown on Saturday, 20 June 2009, after a few months of holding the position as the interim President.

Sulayman Drammeh, alias Junkung and Bakary B Darbo, both retained their previous positions as the First and Second-Vice Presidents after winning the votes all together.

Ebrima Eric Drammeh and Nanama Keita were also elected to run the affairs of the Public Relations and Programme Officer for both teams, respectively.

Meanwhile, four new faces that have also been elected to run the various positions included; Masaneh Jammeh as the Secretary-General, Pa Alieu Ceesay, Assistant Secretary, Sanna Jarju , Assistant Treasurer and Kemo Cesay as Auditor.  Dawda Barrow of the GFA also maintained his position as the Treasurer.

Delegates shortly after the conclusion of congress expressed dissatisfaction for what they described as poor organisational skills, particularly in the field of football and urged the newly elected executive to work hand-in-glove in order to improve the standards of sports in Bakau. They cited the dilapidated Bakau Mini- Stadium, which is said to be in  serious condition. 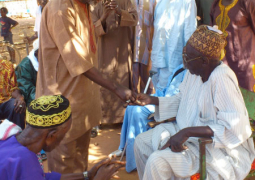