It was not long ago when we lauded the move by President Yahya Jammeh to lift the ban on The Standard newspaper and Teranga FM on New Year’s eve, as a good sign for the country’s democracy.

The move, we said, was timely and a welcome one for a number of reasons.

We expressed hope that in the year 2014, the press will enjoy a year of increased freedom, and that the repressive media laws will become a thing of the past.

In welcoming the move, we also expressed hope that the government will not only stop at that.

We said that as we enter yet another new year, we would like to once again appeal to the government to review all draconian media laws, and any other law that hinders the work of journalists in this country.

We also reiterated the fact that we, as journalists, have always seen ourselves as partners in development and nothing else because, after all, this country belongs to all of us.

However, our point of contention here is the fact that two of our colleagues remain in detention, since their arrest on Monday by four officers in plain-clothes who identified themselves as operatives of the National Intelligence Agency.

Musa Sheriff, editor and publisher of The Voice newspaper and Sainey Marenah, a freelance journalist, were arrested on Monday and detained at Sanyang Police Station until yesterday, when they were reportedly moved to the Police headquarters in Banjul.

This to us is another setback and worrying signal for us as journalists.

It has always been very strange to us that most people regard journalist as enemies of the powers that be.

In fact, this is a mandate given to the journalist by the Gambian constitution.

The journalists are partners in development, because by reporting the bad news, they are drawing the government’s and society’s attention to drawbacks that needed improvement.

It is for this reason that we further call on the authorities to reconsider their decision and free the two journalists to go back to their normal duties. 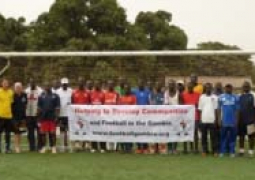