A Tribute from the brotherhood to our brother – Alhagi (Als/ Dr Njie), narrated by two fellow brothers

“… Als was simply the best…”; these are not my words – but that of his pal-nephew, Abdoulie “Potty” Jallow. But yes, Potty spoke for me and, I am sure, he spoke for many who knew Als.

For me he was Alhagi – his family given name. Calling him “Alhagi” was a way of differentiating my passion and friendship with him; he was simply the best, and the gentleman amongst us all - “hands down”! Like many of our friends, I have never seen Alhagi angry, or “lost his cool”, or showed an unfriendly face to me, or to a third party, in more than 40 years, I knew him.

Perhaps, a close second to Alhagi’s civility was my late pal - “Jattahorn” – the late Famara, who used to promise some of his “nemesis” in the brotherhood at no. 26 Clarkson Street, like Bye Malleh with intimidation – “damaa release deh” – meaning, to clench his right-hand fist whilst grabbing you with the other hand tightly on your collar shirt just below the cheekbone – about to release with a right or left knuckle. But knowing Famara, the gentleman he was, never released on people like Byes; these were the fond moments many of us, could remember of “Jattahorn”, may his soul rest in peace.

An anecdote, I will never forget which reminds me of Alhagi, was this…

It was on a Friday just hours before “Juma prayers” during school holidays in the summer of 1972, that, as youngsters beginning our early adolescent life - we were exposed for the first time (at least for me) - to the free enterprise principle of Smith and Ricardo of wealth generation - when Alhagi and I, jointly invested in buying a white beach Pelican bird named “mam hoda” for D1.50 bututs at the “Tanba” near Bond road, from a compatriot school dropout hustler. My negotiations skills at this time, were obviously crude and unsharpened; so I deferred to my friend (Alhagi), whom, I believed, must have been exposed to the art of skillful negotiations, one way or the other – as I watched him engaged himself in a long protracted price negotiation with the “ndogo” hustler - knocking the price from a cut-throat one (1) Pound (or D5.00 as the beach hustler referred to the latter) – to D1.50, the paid price.

Once a deal was struck, I volunteered to hold mam hoda, as we trekked the distance from Bond road (at Wharfi-Njaggo) to Wardner beach to sell mam hoda. If my recollection is correct, Wardner beach hotel, at this time – was just under construction… and we felt that, selling “mam hoda” would earn us few returns, on our meagre investment. Gripped by youthful exuberance and naivety, we arrived at Wardner beach, only to realize how “worthless” our investment was. My pal, the skillful negotiator, tried his best to sell mam hoda for a gain, but we resorted to “flinging” the latter, when a hotel worker offered us two (2) bucks; I guessed, out of sympathy, for the two youngsters; but more so, I believe, for buying the freedom of mam hoda from my clutches.

The brotherhood at Vous-26

The Invincible Teenagers Club (ITC) was one of the few thriving football clubs in Banjul in the early seventies (70s), nurtured and groomed under the left-handed calligrapher and teenage mentor and club manager – the late Matarr (Pindo) Drammeh, fondly referred to as “Pins” – may his soul rest in peace.

Vous-26 coined after “No 26 Clarkson Street”, was the seat of the brotherhood – and the family compound of our late friend Alhagi, or Als; the brotherhood was paradoxically led by our elder sister (Aji Amie Jaye (Mrs Habib Jeng) - or Miss Jaye, as we then, passionately used to call her. It was Amie who perfected the nickname of “Adius” as she used to affectionately seize my attention. It was Amie who provided the physical space (the hang-out), the “gas-chop” (i.e. the late night food leftovers), and above all - the time and patience of nurturing the young teenage brotherhood.

Bonded by a common desire for the pursuit of excellence, Vous 26 led by a gang of 7, splintered from ITC due to what the gang felt was an unfair treatment of one of them – the none selection of Chux for countless football matches with city rivals.

The Vous later metamorphosed into a brotherhood of the following friends:

My friend in South Africa…

Alhagi was a medical lecturer at the University of Witwatersrand (or Wits) in Johannesburg, and senior medical doctor at Mmabathou Hospital, in the North West Province, of South Africa.

Dr Njie was passionate and loved humanity; he, like many did, could have enjoyed the plush, and high quality life-style of Joburg as a medical lecturer at Wits; or even move to Cape Town, if he chose to teach, or work at UCT’s medical school; but no - our friend, instead, devoted to serve humanity at its lowest ebb by any standard of imagination and need – the people of the corrugated metal sheet Shacks and service delivery-stricken townships of Mmabatho and Mafikeng, the capital of the North West province – one of the 9 administrative Provinces of the republic of South Africa. Alhagi was selfless!

Whilst in South Africa, Alhagi developed kinship with the West African diaspora in Johannesburg and Mafikeng, largely made up, of Senegalese and Mauritanian business immigrants. He developed also close surrogate kinship with the South African Indian muslim community of Lanesia, near Soweto. It was here that Njie, as he was fondly referred to, by his Senegalese friends - found solace and peace and purity of worship to his deity – Rahman. Sheikh Mohamed Yousouf Ould Ahmedou – a Mauritanian transplant of Lanesia - was one of his closest and trusted confidants. I remember when Njie introduced me to Sheikh Youssouf at his Halal shop in Midrand – telling him that I was his childhood friend from Gambia. We spent hours at Sheikh Youssouf’s Halal shop, reminiscing of Banjul, and the good old days at Clarkson, picking on one of the vous-brothers at a time.

It was Sheikh (Imam) Youssouf and the Senegalese brothers who would continuously recite the relevant verses of the holy Quran for our friend during the last hours of his life on that fateful Friday night.

My heart melted and my eyes filled with tears, when I witnessed son-fatherly love relationship at its best, when his two sons Mustapha and Amadou – continuously held daddy’s hands and caressing him with affection. What I would never forget was what Amadou, the elder son told me, “uncle, my dad was good man”.

My respect and admiration goes to Gass, Alhagi’s wife – and mother of the boys – for the love and support – given to Alhagi and the two boys, during the hours of greatest need.

Adieus Alhagi, you will surely be missed by the Clarkson brotherhood. And thanks for introducing me to Sheikh Youssouf and the West African brothers in Johannesburg.

The above Tribute was contributed by Adama Deen

Als had informed me that his son was interested in coming over to the U.S.A to study. He had also informed me that he enjoyed the emails with attachments which he received regularly from me, and that they came in handy during a presentation with some technical difficulties. He used them to entertain the attendants. He said that everyone in attendance were interested to find out what website to get them from. He said to them to just accept it the way it was because the origin was from his brother. We were his brothers. If anyone says that they could only imagine what his family is going through; that is us. We are his family. We were students at #26 Clarkson Street, where we learnt a lot. It was a community center that hosted us from different backgrounds, religion, and “tribes”. We all enjoyed the same privileges. It was a school, a community center, and our playground. It was not just a “campeh kai.” We spent hours from the moment were left our school grounds to the time we were ready to go back to school in the morning. Our parents knew that we were not involved in anything unworthy because we were at # 26. It was not so long ago. I can still remember Als explaining Taenia saginata (the beef tapeworm) in those days. Abou’s pet subject was modern physics. I could remember him explain away about the Cathode Ray Oscilloscope (Whatever that was). Kunta and Deen often delved into history, especially on the teachings of Professor Adu Boehene, Bala Gaye’s mentor, and about the political mumbo jumbo. Deen was also the dean of Agric science among the group.

Whatever name we knew Als by, he was dear to all of us. He was a very special brother. All of us have had our explosive moments, but through all those years I knew him, going back to when I was in class 1, and he was in class 2 at Methodist Prep. in Banjul, not even once did I ever witness him losing his temper. Chux (of blessed memory), Aggrey, Kunta (Though he transferred, I believe to Roman School, later), Chris da Costa (Transferred, I believe, to Malawi where his mother was working). Alex Dacosta, I believe, was in the same class as Als), Omar Jallow, Mustapha N’jie (Yahi), P. A. Riley, Tijan Sallah, and Eric Lewis, were 2 classes ahead of us. Those of us who were classmates spent time together and visited each other’s homes. As we finished elementary school everybody went their separate ways until fate brought us back together. There were few schools in Banjul not so long ago, so everybody knew everyone else.

I frequented Adama Deen’s home when he became my classmate at Gambia High School in 1974. As a result, I reconnected with 26 Clarkson Street through Deen who lived opposite #26, and spent a great amount of his days over at #26. Regulars whom I found there firmly established were the above - named guys, and Pa Jallow, John Prom, Abou Mboob, Papa Jallow, Badou Senghore, Ken Johm, Pa Saidou N’jie (Waya), Peter Joof, Cherno Gaye, Presi Jack , Lamin Jobe, Eliman Bah, Pa Dodou Mbye, Saul Jallow, Fams (Of blessed memory), Sal Jack, Jobe Sassu, Saul, Peter Joof, Kambi, Bye Malleh. Some of us gallivanted to Peter Ndow’s home in Fajara en masse to enjoy some “Ataya” on some evenings. We spent some time at Saidou Sowe (Gai’s) shop, and at Pa Sallah’s (Amir) at Lancaster Street. Those were the good old days.

Adieus brother, rest in peace; until we all see each other again in the Day of Al Qiyamah (the Resurrection). 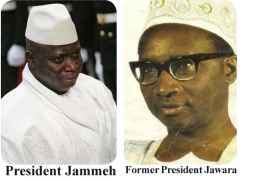