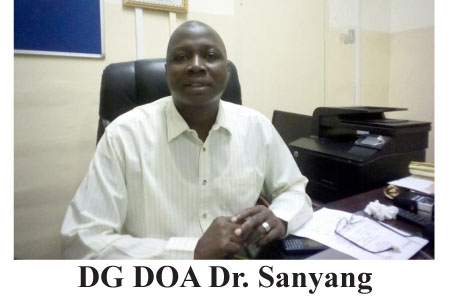 At least seventy staff of the Department of Agriculture have been promoted last week which was done based on the length of their services and experience.

According to him, staff welfare is part of his priorities when he was appointed as Director General. “When I was appointed in November 2018, I conducted a familiarisation tour to the six agricultural regions during which I identified three priority areas.

He said the tour has enabled farmers’ early access to seeds and fertilizer, saying for the past years fertilizer have been a big issue but with the new minister in consultation with his staff, 600 tons of fertilizer was provided to the farmers on time.

“Most interesting is that a bag of fertilizer was sold for D700 out of which D650 goes to the department as revolving fund and the D50 dalasis as commission for the sold agent.

“I realized that for the past five years, some of the staff have stayed for a long period of time without being promoted. This new promoted staff range from senior to junior staff of the department.”