Sixty five (65) villages in Jokadu, Lower and districts in the North Bank Region were last week sensitised on environmental conservation.

The purpose of the campaign was to sensitise the communities on the importance of protecting and conserving the natural resources for future uses.

Mr. Abdoulie Sawo, the Project Coordinator revealed that Niumi- Saloum Transboundry Biosphere Reserve started in 2005, and is a partnership between the and . He added that the project which is covering 70, 000 hectares in the (Lower and and Jokadu) has a lot of benefits for the communities.

According to him, the ultimate aim of the project is to empower communities and recognise the need to protect their environment so that they can take ownership of them.

"We have noticed that we are loosing the forest cover rapidly, especially with the use of the chain saw machines which are very common nowadays and this has resulted to land degradation, erosion and scanty rain fall" he added.

Mr. Sawo further urged the communities to set up environmental committees that would serve as village development committees to ensure effective management of their environments.

For his part, Mr. Kawsu Jammeh, the group leader revealed that the project comprises two things: conservation and community development.

"We are not stopping people from using the resources but we are advocating for sustainable use of the resource, so that they are available for generations to come" said Mr. Jammeh.

He noted that the government has empowered the local communities to enact communities' policy and benefit -sharing, adding that due to malpractice a greater part of the forest cover has disappeared, and as a result some of the animal species are no longer found, resulting in land degradation and erosion.

For their parts, some of the alkalolu in the area urged that, "people are given licence by the authorities to cut trees in our forest even without the permission of the communities". According to some of them, in some communities, the alkalolu and the Village Development Committees have employed the services of youths to cut trees when they should protect the forest.

They then appealed to President Jammeh to put a stop to it by banning the importation of chain saw and recommend use of fishing declared breeding areas as no fishing zone. 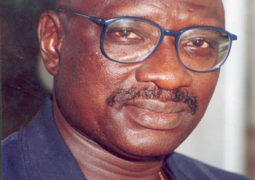