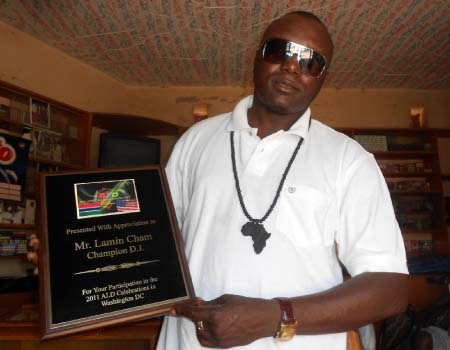 Gambia’s famous DJ Lamin Cham has put the country on the musical world map by receiving another international award during the celebration of the African Liberation Day in a colourful ceremony held in Luckvile, Maryland in the US.

The Gambian DJ was awarded by the Gambian-American Association, a charity organisation based in Washington DC in the USA.

DJ Lamin Cham, who was speaking to Entertainment recently at his studio in Westfield, said the annual event, which is designed to honour outstanding personalities in societies, also witnessed the decoration of another Gambian international figure and football legend, Alhaji Biri Biri Njie.

Mr Cham further told Entertainment that colourful stage performances were done by The Gambia’s mbalax star Pa Omar Jack, with other international Gambian DJs such as champion DJ Lamin Cham and Moses, the proprietor of Junction Vibes, in attendance.

DJ Lamin Cham, during the interview, expressed gratitude and appreciation, saying it is a challenge for him to redouble his efforts towards the development as well as the promotion of Gambian music in particular.

He added that he is extremely glad that his efforts have been appreciated by the people.

DJ Lamin Cham, with his wonderful efforts, has already established a name for himself in The Gambia, the UK and the US, which makes him to win the hearts and minds of many music lovers whenever he performs.

DJ Lamin Cham, in conclusion, thanked the members of the association in the US for recognising his performance and efforts in the art of music.