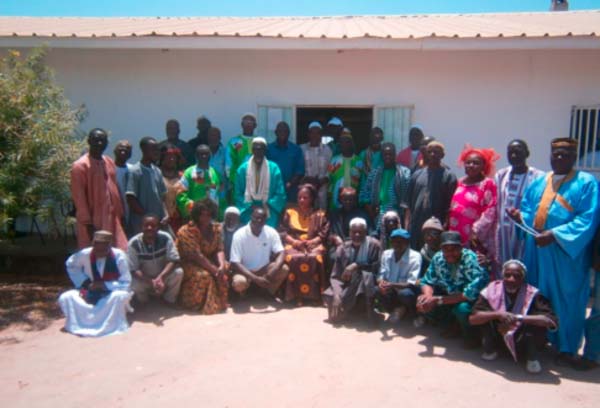 At least thirty-two village heads in Kombo East West Coast Region Wednesday commenced a two-day training session on the Local Government Act 2002, and citizenship as per the 1997 constitution of The Gambia.

The training exercise was held at Sohn village, and was organized by the Kombo East Alkalolu Association through the office of the West Coast Region Governor, with facilitators from the National Council for Civic Education, NCCE, and funding from the Kaira Nying Federation, a local partner with ChildFund.

In her official opening statement, the West Coast Region Governor, Safai Hydra, expressed delight about the initiative, adding that the training activity would help the alkalolus of the area in the dispensation of their duties, as well as to understand their roles and responsibilities in order for them to better serve their people.

She advised the participants to take the training course seriously, and to make best use of the knowledge gained as traditional leaders, since it would help them in the smooth running of their villages.

The regional governor further said no meaningful development could take place without unity and peace, adding that President Yahya Jammeh has put traditional rulers high in his government’s agenda.

She challenged them to avoid conflicts that emanate from land disputes, as well as land selling, while urging other districts to emulate the Kombo East Alkalolu Association.

In his welcome remarks, the chief of Kombo East, Alagie Basiru Jarju, expressed similar sentiments and commended the members of the association for their foresight in forming such an association in his district.

This was what is expected of patrotic citizens, to demonstrate their unity by coming together, he said.

He challenged the village heads to continue this cooperation in his district, which he said would greatly help them to better serve their communities.

Chief Jarju thanked the Governor of the West Coast Region for leaving all her busy schedule to come and open the training course.

Presenting a paper on the introduction of the Local Government Act 2002, the development and financial provisions, the programme manager NCCE, Yusupha Bojang, explained that the NCCE was created as an independent, non-partisan council under the constitution, to design and co-ordinate civic education programmes and to serve as the advocacy component to the National Governance Programme.

He said the Act thus places responsibility on the council for sensitisation, information and education of the citizenry, particularly at the grassroots on their rights and responsibilities under the constitution.

Regarding the issue of civic education, Mr Bojang said civic education is learning for effective participation in the democratic and development processes at both the local and national levels.

At the core of civic education are the values and principles of transparency, participation, responsiveness, accountability, empowerment and equity, he went on.

According to Mr Bojang, in April 2002 the National Assembly passed the Local Government Act and the objective of the Act is to establish and regulate a decentralized local government system for The Gambia; to make provision for the functions, powers and duties of local authorities.