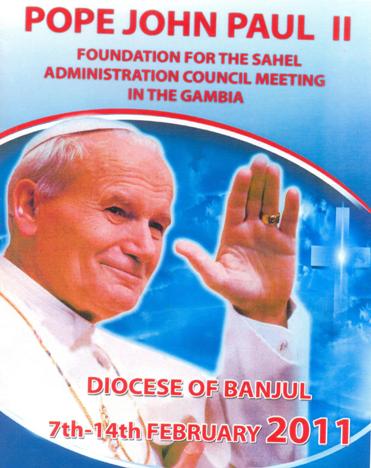 Over Twenty (20) delegates including Bishops, Priests and Lay people are currently gathering in for the 29th session of the Pope John Paul II Administration Council Meeting underway at the Kairaba Beach Hotel.

The meeting, hosted by the Catholic Diocese of Banjul, The Gambia, brought together members of the Administration Council of the Pope John Paul II Foundation for the Sahel as well as observers from the Italian and German Catholic Bishops’ Conferences, and the Pontifical Council “Cor Unum” in Rome.

An organization of the Catholic Church created in 1984 by the late Pope Jonh Paul II, the Foundation is made up of nine West African Countries. The Foundation among others seeks to provide support for Sahelians affected by drought conditions on the basis of projects submitted according to specific criteria and selected by the Foundation’s Project Committee.

Declaring the meeting open on behalf of President Jammeh, the minister of Fisheries, Water Resources and National Assembly Matters, Lamin Kaba Bajo underscored the importance of the meeting.

According to him, the vision of the late Pope John Paul II to start this foundation is indeed a blessing to us in the Sahel region, which is always affected by drought and its consequences such as poverty, food insecurity, starvation, disease and migration among others.

“The Gambia Government holds the Catholic Church in high esteem for their exemplary role in reaching out and helping the poor and marginalized in our communities, a humanitarian gesture they have always performed selflessly without discrimination,” he said, adding that a lot of Gambian Christians and non-Christians alike are living witness of such love, concern and generosity.

He noted that agriculture, education and health, which are among the Foundation’s priority in attracting funds, are fundamental in any developing nation, particularly The Gambia. “Educating and training the human person especially at grassroots level, is a way of building the capacity of the individuals which translates to the community and thus, providing them with prerequisites to handle and manage resources responsibly,” Bajo stated.

Commending the late Pope John Paul II and the financers and others for their concern and support especially to the less privileged and marginalized, Bajo further underscored the Church’s contribution to national development and urged them to continue contributing their quota in making a difference in the lives of our peoples.

In his welcoming remarks the Bishop of the Catholic Diocese of Banjul Most Reverend Robert P. Ellison CSSp said the last Administrative meeting of the Council of the foundation was held in The Gambia in 1999.

Expressing hope that participants will have an opportunity to experience the wide variety of people and situations that constitute the fabrics of this country, Bishop Ellison said that the business of the meeting is the focal point of the visit.

“The population of the Gambia is about 1.7m while the catholic population is made up of about 43,000 members which accounts for about 2.5 per cent of the total population. Hence, we are a small Church which forms part of a wider Christian presence which is still very small relative to the vast majority of Gambians,” Bishop Ellison stated.

According to Bishop Ellison, the support and the assistance which they have received over the last 27 years from the Pope John Paul II Foundation for the Sahel has enable them to do this by way of the enormous contribution it has made to the development wing of their mission to the people of The Gambia whatever be their creed, gender ethnic group or culture.

“Like a farmer who throws the seed on the soil and then wait patiently for the harvest, we too strive to witness as a church called to be a sign and instrument for bringing about a harvest of unity, peace and hope in a world where there is so much discord, violence and strife. 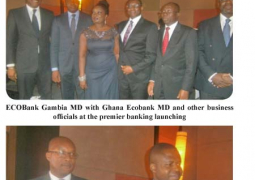