At least twenty-five lifeguards were recently certified after completing a three-day intensive training on lifesaving, organised and sponsored by the Gambia Tourism Authority, in collaboration with the Kanifing Municipal Council (KMC).

Speaking at the handing over ceremony held at Dunes Resort in Kololi, Mr. Ousman Kebbeh of the Gambia Tourism Authority commended the trainers who travelled all the way from the to train the youths on lifesaving. He advised the beneficiaries to put the knowledge gained from the programme into good use.

According to him, it is the responsibility of the Gambia Tourism Authority to train youths both formally and informally, particularly in the area of saving lives.

Adama Jeng, a senior officer at the KMC, who spoke on behalf of the Mayor, said his office is very much impressed with the training, adding that "in any tourism sector, without lifeguards is just like going to war without weapons." He noted that his council would always be available to give support to the GTA.

Kebba Kujabi, the President of the Gambia Live Guards commended the Gambian leader and the Ministry of Tourism and Culture for giving them the opportunity to attend such an important training. He also thanked the KMC and the trainers for the support rendered to them.

Other speakers included Jerreh Sanneh of the KMC, Assan Njie of the GTA, among others, who all expressed similar sentiments. 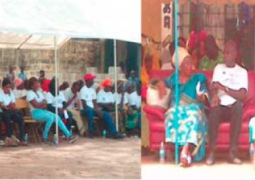