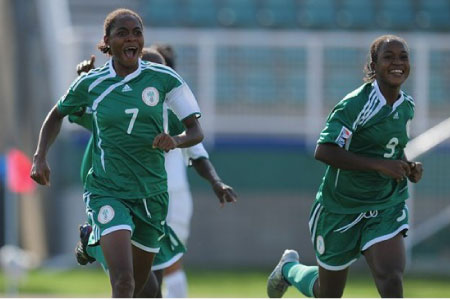 Profile:  Nigeria (NGA) Pointsport will be bring to you profiles of teams that will be participating in the upcoming FIFA U-17 Women’s World cup set for  next month in Azerbaijan.    The profiles of the 16 teams participating countries namely Nigeria, Ghana, The Gambia  from Africa, China PR,  Japan , Korea DPR from Asia Azerbaijan, France and  Germany from Europe, North America trio Canada, Mexico and  USA, Oceania’s  New Zealand and Brazil, Colombia,  Uruguay  from South America will be carried in detail in the build-up to the tournament as at FIFA.com

below is the  profile of Africa’s power house in women’s football, Nigeria:

Like fellow-qualifiers Ghana, The Flamingoes have been ever-present at the FIFA U-17 Women’s World Cup and two years ago in Trinidad & Tobago became the first African country to escape the group phase. After winning their three group matches they advanced to a quarter-final clash with eventual champions Korea Republic, and in a game that must rank as one of the all-time greats at any FIFA competition, the Asians beat the west Africans 6-5 in extra time. It was not the only time that The Flamingoes had created some waves at the competition, as in 2008 in New Zealand, where they were eliminated in the first round despite managing a 2-2 draw with Brazil and a defeat of the Korea Republic.

Coach Peter Dedevbo, who was also in charge of the team at the last finals, has indicated that he will look very carefully at the squad he used during qualifying. “I will test some new players and there is a good chance that some of them will make the trip to Azerbaijan,” the 42-year-old said. “There are a lot of good young players in our country, and I am confident that I will have a strong squad at the finals. We will start preparing well in advance of Azerbaijan.”

Dedevbo, who also coaches the strongest women’s club side in Nigeria, the Delta Queens, is confident that the women’s game in the football-crazy country will continue to grow. “We started developing women’s football two, three decades ago and we have been able to reap the rewards. I believe the game is catching up in Africa and we will soon be on par with Europe and the US. Qualifying for tournaments such as the Under-17s obviously helps, as it keeps women’s football in the focus.”

Although three Nigerians scored two goals in the final round of qualifying against Zambia - Chidinma Edeji, Patience Okaeme and Halimatu Ayinde - the coach said he does not want to single out current players. “I am proud to have a team in which the game is built around each and every individual player,” he explains.

The Flamingoes had little trouble in the two rounds of qualifying for the finals, beating Kenya 2-0 and 3-0 and then following that up with 2-1 and 5-0 victories against Zambia. “Both teams were strong and even though we won all four matches, it was not that easy,” said Dedevbo.

10 - The number of times that Nigeria have won in qualifying for three U-17 Women’s World Cups out of 12 overall matches. Their only blemishes came in 2008 when they lost to Ghana and drew Cameroon in the preliminaries. fifa.com

There Are No Players Who are Indispensable Here - GFA Prexy