The International Monetary Fund (IMF) yesterday announced that the economic outlook for 2011 is generally positive, especially if hints of improvements in the tourism sector develop further.

The announcement followed a visit by an IMF mission earlier this month to review recent economic developments and discuss with the government economic policy initiatives planned for this year.

Below we reproduce the full text of the statement issued by Mr David Dunn, IMF mission chief for The Gambia, at a press conference held at the Ministry of Finance in yesterday.

"An IMF team visited The Gambia during March 4–17, 2011 to review recent economic developments and discuss with the government economic policy initiatives planned for this year. The team met with His Excellency President Yahya Jammeh, Honorable Minister of Finance and Economic Affairs Mambury Njie, Central Bank of The Gambia Governor Amadou Colley, and other senior officials. The staff team expresses its appreciation to the authorities and technical staff for their excellent cooperation and candid discussions.

Preliminary data indicate that the Gambian economy continued to perform well in 2010, despite lingering effects of the global economic crisis on tourism receipts. Led by another strong expansion in agriculture, real gross domestic product (GDP) growth is estimated to have grown by about 5½ percent. Inflation edged up in 2010, mainly because of rising international food and fuel prices. The economic outlook for 2011 is generally positive, especially if hints of improvements in the tourism sector develop further.

The government's basic fiscal balance slipped into a substantial deficit during the final quarter of 2010, leading to a large issuance of T-bills late in the year. The impact on yields was dampened, however, due to strong demand for government paper by commercial banks arising from the end-year increase in the minimum capital requirement. Official international reserves remained at comfortable levels. The structural reform agenda continues to progress steadily. The , however, still faces a heavy debt burden. In 2010, interest on debt consumed about 20 percent of government revenues, most of which was paid on the large stock of outstanding T-bills. Going forward, the authorities place a high priority on curbing the government's domestic borrowing.

The Gambian authorities are making good progress with their preparations of the Programme for Accelerated Growth and Employment (PAGE), which will succeed the current poverty reduction strategy beginning in 2012. The PAGE will emphasize government support for agriculture and infrastructure investment. Financing of the PAGE will pose a significant challenge in light of the country's already heavy debt burden and falling tax revenues (relative to GDP). The authorities plan to seek donor support for the PAGE, but avenues for private sector participation should also be explored.

The current arrangement under the IMF's Extended Credit Facility will expire at the end of this month. An IMF team will return to The Gambia later in the year to discuss a possible new credit arrangement."

Previous:
Norwegian tourist charged for multiple criminal offences
Next:
'I am not hostile to you', Jammeh tells journalists

Valentine's day on Sunday, Jokor in the spotlight 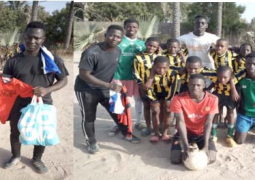