The 1st edition of Anglophone West Africa Youth Integrity Camp is underway in Lagos, Nigeria, with 80 youths taking part in the five-day meeting.

The camp is being organised by Independent Corrupt Practices and Other Related Offences Commission (ICPC) of Nigeria in partnership with the United Nations Development Programme (UNDP) and Transparency International for youth leaders from Anglophone West Africa (Liberia, Nigeria, Ghana, The Gambia and Sierra Leone).

The camp aims to increase awareness on anti-corruption issues for a more focused and proactive youth involvement in the fight against corruption.

It also aims to establish a network of youth leaders who are empowered and motivated to use their dynamism and innovative minds to promote integrity and public accountability.

The Lagos camp would also provide youth with tools to enhance their efforts as agents of change in their respective communities as relates to fighting corruption.

In his welcome address on Monday 23 September 2013 at La Campagne Tropicana Beach Resort in Likki, Lagos, ICPC chairman Ekpo Nta, Esq challenged youth at the camp to prepared themselves for good leadership in future.

According to him, the problem of corruption is not peculiar to one single country but its effects are severe.

He urged youth of the sub-region to serve as agents of change while urging them to take their rightful place in the world.

“We received about 800 entries from Nigeria alone and only 40 of you are being selected from all the six geopolitical zones, so you should take this camp seriously knowing fully that you were fully selected,” he said.

He urged participants to share the knowledge gained with friends and colleagues back home in their respective countries and communities.

For his part, Professor Sam Egwu of the UNDP Nigeria office stressed that the UNDP remains very much committed to fostering public accountability and development in countries where they operate.

“UN is particularly excited to partner with ICPC in organizing this camp and we believe that in building the future we have to invest in the youth,” he said.

He also said across the world young people are being actively involved and active towards ensuring that integrity prevails and African youth, particularly those in West Africa, cannot be left behind.

In his opening statement on behalf of the Governor of Lagos State, H.E. Babatunde Raji Fashola, SAN, director general at the office of Transformation at the governor’s office, Mr Toba Otusanya, said the Lagos State government was very much committed to good governance.

As such he said in every 100 days, the state gives its accounts to the Federal Government. He encouraged participants to take the camp with seriousness and to become change-makers.

In his goodwill message to campers, Rtd Brigadier General Ebrima Bah, Gambia’s deputy High Commissioner in Nigeria based in Abuja, lauded the initiative of brining the youth from across the sub-region for such an important gathering.

According to him, the coming together of the youth of our respective countries to grace as well as learn and impact knowledge, establish bi-lateral and multi-lateral relationships with the aim of fostering integrity, accountability and corrupt-free society is a step in the right direction.

Other goodwill messages were delivered by the representatives of the Liberian Embassy in Nigeria and Transparency International in Berlin, Germany.

The inaugural lecture of the camp was delivered by a representative of the Nigerian Federal Ministry of Youth Development. 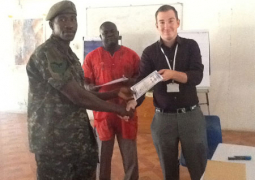