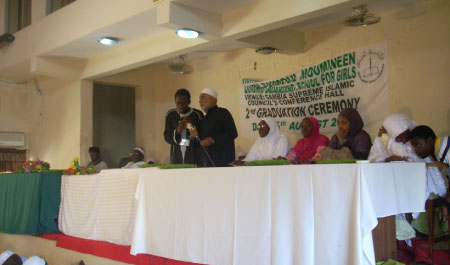 Twelve more girls in the country have completed memorizing the Holy Quran.

The graduation ceremony, attended by parents of the girls, was held at the weekend at the Gambia Supreme Islamic Council Conference Hall in Kanifing.

Speaking at the ceremony, Aja Jainaba Dibba, founder of the school, urged people to support the girl child to maximize their potential.

She thanked the teachers for imparting knowledge in the girls and the parents of the graduands for bringing their children to learn the holy book.

Ms Dibba also thanked the President of the Republic of The Gambia for being the chief patron of the school and also for his support towards girl’s education.

The number of students is increasing, he said, adding that the place where the school is located is her compound given to her by the Gambia government. She also appealed for support.

She also thanked one Khadijatou Jallow, who she said is helping her both day and night in moving the school forward.

Aja Maimuna Savage, a prominent scholar, was full of praises for Jainaba Dibba for the great work she is doing, as well as for those who are behind her. She also highlighted the importance of the Holy Quran.

Imam Sheikh Sheriff Badjan, vice president of the Gambia Supreme Islamic Council, said the graduation of students was not the first of its kind in the school and prayed for Jainaba Dibba and all those supporting her.

He also urged the graduands to continue studying the Holy Quran despite memorizing it for its continued blessing.

Sheikh Ebrima Cham, member of the examining body for the graduating students, highlighted the importance of the gathering.

These kinds of schools led by ladies in the country that focus only on teaching girls are few and thus need to be supported, he says.

Sheikh Omar Kuraiz, President of AMANA, said the school being led by a lady has shown that both men and women are equal in front of Allah, adding that it is a blessing seeing small girls memorizing the Holy Quran.

He added that, it is a duty to every Muslim to be able to read the Holy Quran or even memorise it so that he/she can know how to worship Allah.

Fatou Mbye, deputy speaker of the National Assembly, prayed for the graduating girls and other students in the school as well as the country as a whole. He also commended Jainaba Dibba for her work.

Alhagie Karamo Jaiteh, president of the Parent Teachers Committee, also thanked Jainaba Dibba for instilling knowledge and respect in the students, adding that “seeking knowledge or raising up a person is not easy”.

There is nothing to regret for enrolling your child in an Arabic school to learn the Quran, he said, adding that it is a blessing. 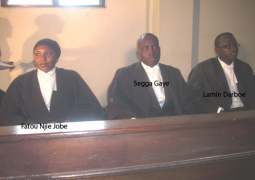