A US$10 million electrification projectfor the West Coast Region (WCR) was on Friday inaugurated at a ceremony held in Bwiam in the Foni Kansala district, as part of the celebration of the 20th anniversary of the July 22nd Revolution.

Electricity supply is regarded as the power driver of economic and social development; a catalyst in the empowerment of the rural population and poverty alleviation; in the promotion of education, especially for girls; and for modern farming and security enhancement in rural communities, said the Vice President, Isatou Njie-Saidy.

Delivering the inaugural speech on the occasion President Yahya Jammeh, the Vice President saidthe West Coast Region electrification project is one of the numerous development projects the Gambia government embarked on since the July 22nd Revolution 20 years ago.

“I am pleased to say that this project has been fully-funded by the Government of The Gambia to the tune of 10 million United States Dollars,” VP Njie-Saidy declared.

Describing the huge economic potential of the WCR, the Vice President said the region deserved nothing less than first-class infrastructural facilities and essential services to allow maximum exploitation of its potential.

She added that the commissioning of such a major project would contribute significantly to unlocking the vast potentials of the region for the benefit of its residents, and the country at large.

Mrs Njie-Saidy expressed hope that the project would encourage the people of the WCR, especially the youths, to take advantage of the availability of electricity or power supplyto go into small- and medium-scale enterprises, and to learn skills like welding, tailoring and other power-based vocations to sustain themselves and their families.

With this, she further hoped the negative consequences of rural-urban migration would be “significantly reduced and eventually reversed,” as people begin to appreciate the abundant opportunities in the rural areas.

According to VP Njie-Saidy, the government through the Ministry of Energy and NAWEC is participating in numerous regional efforts with a view to accessing alternative means of producing electricity through solar and wind energy.

Energy Minister Dr Edward Sarja Sanneh said his ministry would continue to pursue the common vision of providing reliable and affordable electricity supply to all Gambians, which is in line with their policy objective and Vision 2020 attainment.

President Yahya Jammeh was commended by NAWEC’s Managing Director Ebrima Sanyang for his foresight, support and guidance, as well as forhis government’s invaluable supportrendered to NAWEC.

NAWEC made use of local manufacturers to procure most of the materials needed to do the job, which saved the country from spending huge sums of money to get them from elsewhere and helped them procure more materials, which resulted in electrifying more villages.

NAWEC would continue to play its role in attainingmore economic development for the country, and would work tirelessly to ensure the infrastructure inaugurated served its purpose.

Global Trading Group project manager Amine Saad, in his statement on the occasion, said the dynamics of any national development are unsustainable without the vision and foresight of its leader and, as a result, they “clearly attest to the fact that The Gambia is blessed with a visionary leader who would go beyond the limits to make basic living essentials affordable to his people.”

He said their doors are always open to both NAWEC and institutions ready to serve the welfare of the Gambian people, in the execution of development projects in various sectors. 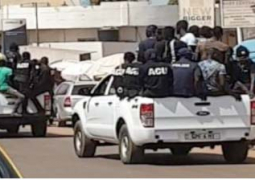