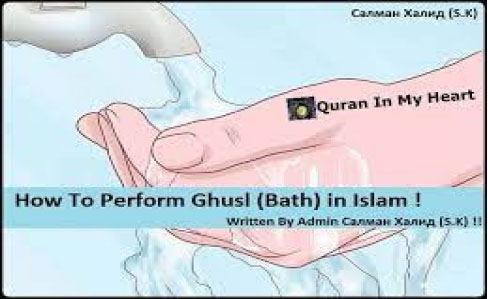 Scholars also encourage Muslims to perform ghusl for the ‘id prayers, even though there is no authentic hadith to support this opinion. It says in al-Badr al-Muneer, “The hadith concerning performing ghusl for the ‘ids are weak. But there do exist good reports from the companions (on this point).

Ghusl for washing a corpse

According to many scholars, performing ghusl is also preferred for one who has washed a corpse. Abu Hurariah reported that the Prophet, upon whom be peace, said, “Whoever has washed a corpse must perform ghusl, and whoever carried him must perform ablution.” (Related by Ahmad, Abu Dawud, at-Tirmizhi, an-Nasa’i, Ibn Majah and others.) However, there is some criticism of this hadith. ‘Ali ibn al-Madani, Ahmad, Ibn al-Munzhir, ar-Rafi’ and others say, “The hadith scholars did not classify anything on this topic as authentic.” But Ibn Hajr quotes at-Tirmizhi and Ibn Hibban: “At-Tirmizhi called it hassan and Ibn Hibban called it sahih. And, due to its numerous chains, it is most likely Hassan. An-Nawawi strongly refutes what at-Tirmizhi said.” Says azh-Zhahabi, “The chains of this hadith are stronger than a number of chains of the hadith that the jurists argue by.” The order in the hadith implies preference, based on what has been related by ‘Umar, who said, “We used to wash the dead. Some of us would perform ghusl and some would not.” (Related by al-Khateeb with a sahih chain.) When ‘Asma bint Umaish washed the body of her deceased husband, Abu Bakr as-Siddiq, she asked if there were any among the emigrants present, and said, “This day is extremely cold and I am fasting. Do I have to make ghusl?” They said, “No.” (Related by Malik.)

According to the scholars, it is also preferable for one who is undertaking the pilgrimage or ‘umrah to perform ghusl. Zaid ibn Thabit related that he saw the Messenger of Allah, when he intended to perform the hajj, perform ghusl. (Related by ad-Daraqutni, al-Baihaqi and at-Tirmizhi, who called it hassan. As-Usaili regarded it as weak.)

It is preferable for whoever wants to enter Makkah to perform ghusl. It is reported that Ibn ‘Umar, when going to Makkah, would spend the night in Tawa, and would enter Makkah during the day. He mentioned that the Prophet, upon whom be peace, also used to do this. (Related by al-Bukhari and Muslim.) Ibn al-Munzhir said, “All of the scholars say it is preferred to perform ghusl upon entering Makkah, but if one does not do so, there is no expiation for him to make. Most of them say that the regular ablution is sufficient.

Such an act is preferred while one stops there during the hajj. Malik ibn Nafa’ reported that Ibn ‘Umar used to do so before embarking upon the hajj, upon entering Makkah, and while stopping at ‘Arafah.

This involves distinguishing the acts of worship from the customary acts. The intention is only in the heart, and should not be stated, as this would be tantamount to innovation.

This is based on the following: Says Allah, “If you are sexually impure, cleanse yourselves,” that is, perform ghusl, and “They ask you concerning menstruation. Say: ‘It is an illness, so leave women alone at such times and go not in unto them until they are cleansed,” that is, until they perform ghusl. The proof that cleansing means ghusl is in the verse, “O you who believe, draw not unto the prayer when you are drunk until you know what you utter, nor when you are polluted, save when journeying upon the road, until you have bathed (taghtasilu).” This shows that ghusl, the washing of all bodily parts, is meant.

How ghusl is performed

According to the practice of the Prophet, upon whom be peace, the correct manner of performing ghusl is:

3 make a complete ablution (like the one made for prayer--the Prophet used to delay washing his feet until the end of his ghusl if he was using a tub, and so on),

4 rub water through one’s hair three times, letting the water reach down to the roots of the hair,

5 pour water over the entire body, begining with the right side, then the left, washing under the armpits, inside the ears, inside the navel, inside the toes and whatever part of the body can be easily rubbed. This account is based on the following report from ‘Aishah: “When the Prophet, upon whom be peace, took his bath after sexual intercourse, he would begin by washing his hands. Then he would pour water from his right hand to his left and wash his sexual organs, make the ablution for prayer, take some water and put his fingers to the roots of his hair to the extent that he sees that the skin is wet, then pour water over his head three times and then over the rest of his body.” (Related by al- Bukhari and Muslim.) In one narration it states, “He used to rub his head with his hands until he was certain the water reached his skin, and then he poured water over it three times.” It is also related that she said, “When the Prophet would perform ghusl after having had sexual intercourse, he would call for some water, which he would pour on his right hand to wash the right side of his head and then the left. He would then take water with both hands and pour it over his head.” Said Maimunah, “I put water out for the Messenger of Allah to perform ghusl. He washed his hands two or three times, and then he poured water from his right hand to his left and washed his private parts, wiped his hands on the earth, rinsed his mouth and nose, washed his face and hands, washed his head three times, poured water over his body, and finally moved from his place and washed his feet. I brought him a towel, but he did not take it, for he shook the water off with his hands.” (Related by “the group.”)

A woman performs ghusl just as a man does, except that if she has plaited hair she does not have to undo it, provided that the water can reach the roots of her hair. Umm Salamah said, “O Messenger of Allah, I am a woman who has closely plaited hair on my head. Do I have to undo them for ghusl after sexual intercourse?” He said, “No, it is enough for you to throw three handfuls of water on your head and then pour water over yourself. After doing this, you shall be cleansed.” (Related by Ahmad, Muslim and at-Tirmizhi, who called it hassan sahih.) ‘Ubaid ibn ‘Umair reported that ‘Aishah discovered that ‘Abdullah ibn ‘Amr was ordering the women to undo their plates of hair (for ghusl). She observed, “It is amazing that Ibn ‘Amr orders the women to undo the plaits of hair for ghusl. Why doesn’t he just order them to shave their heads? I and the Messenger of Allah used to bathe from one vessel, and all I did was pour three handfuls of water over my head.”(Related by Ahmad and Muslim.)